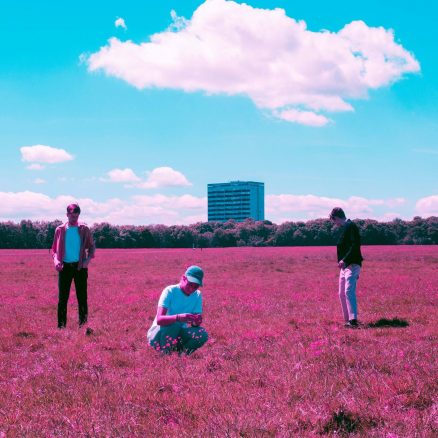 Yorkshire outfit Polo (formed of song-writing trio Luke Lount, Kat Mchugh and Daniel Egdell) might hail from Leeds, but the band’s glacial atmospherics and lush, r’n’b-tinged pop are an ethereal world away from the spit’n’sawdust DIY scene that the city’s best known for.
Formed in 2015, the band released hypnotic, woozily seductive debut single ‘Visions of Fortune’ later that year and racked up performances at annual inner-city festivals Live At Leeds, Tramlines and Long Division, as well as supporting the likes of Bipolar Sunshine and Charlotte OC. 2017 saw the release of their most instantly catchy and accomplished track to date, ‘Gold Horizons’, After receiving the coveted PRS ‘Women make Music’ grant. Polo later released their debut EP, ‘Alice’, in March, 2017. Following a string of key radio plays, including Radio 1, Radio 6, XFM and Amazing Radio, Polo completed their first UK tour, selling out small venues across the country. Building upon that success, Polo released the wobbly and woozy ‘Zeitgeist’ in September, 2017. Exploring a kaleidoscope of exotic sounds, Polo proved their ability to cultivate refined pop bangers. Polo are now set to release a sophomore EP in 2018.
Rei Gyaamie is made up of Reiner Tarry and Phil Jerromes, a singer/songwriter and producer duo currently at Hull University. Their music features a blend between electronic and acoustic sounds bringing together elements of Pop, Dance and R’n’B. Live, they employ the talents of some of the finest musicians in Hull as well using live sample triggering and effects.
Fiona Lee is a singer-songwriter who draws inspiration from the likes of Dermot Kennedy, Billie Marten and Bruce Springsteen – coupled with her own experiences with teen-hood and relationships – she has captivated audiences with her soulful and original storytelling.
With a vocal delivery often compared with Florence Welch, and a delicate but powerful musical backdrop to support, Fiona’s songs have regionally made an impact, and has earned her support slots for Scouting For Girls, and Seth Lakeman.
Doors 8 pm
£5 + BF from seetickets