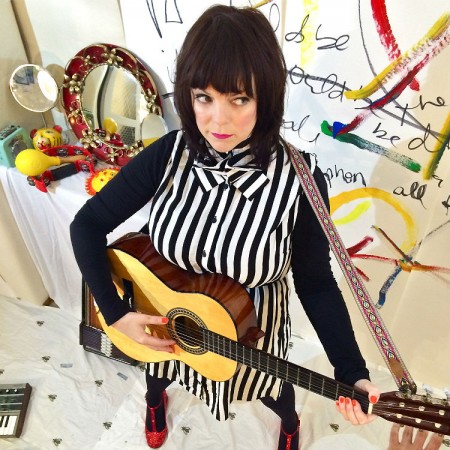 Come see Piney in your town as she hits the road with her chums Samantha Whates and Fiona Bevan. Three solo ladies, doing their solo shows together!

Piney Gir comes from Kansas via London straight to your heart. With a musical style that is predominately edgy indie-pop, she has been described both as a musical “chameleon” and as “the indie Dolly Parton”.
She has been a key player in the UK music scene since moving to London in 1998. Her long list of career credits includes six critically received solo albums, collaborations with Andy Ramsey (Stereolab), Rob Campanella (The Brian Jonestown Massacre), Eamon Hamilton (Brakes/ British Sea Power) and Simple Kid, and BBC radio sessions for Mark Radcliffe, Marc Riley, and Cerys Matthews. Her songs have appeared on Grey’s Anatomy, Private Practice, Hit & Miss, Made in Chelsea, Misfits, Drifters, Waterloo Road, Being Human, Fried, Talking to the Dead, What Remains, Switch, and in feature films Nina Forever, You’re Not You (Hilary Swank), C’e Chi Dice No, and American Girl.

Come see Piney in your town as she hits the road with her chums Samantha Whates and Fiona Bevan. Three solo ladies, doing their solo shows together!

As it’s a Monday night, entry is FREE!

Samantha Whates is a Scotland born, London based singer -songwriter who has as much in common with the sounds from Scando-folk label Rune Grammofon as with the likes of Joni Mitchell, Vashti Bunyan and Suzanne Vega.
Her beautifully crafted, poetic songs retain a strong affinity with her Scottish roots, cultivating a sound that is thoroughly contemporary, rooted in tradition, yet uniquely her own.
Confessional, conversational and understated, Samantha Whates deceptively forceful voice will find a place deep inside your soul and stay around for years to come.