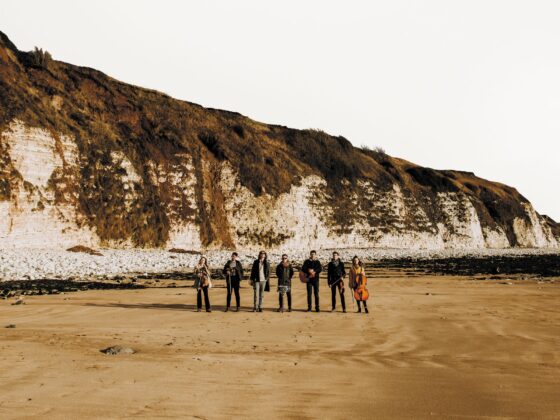 Pavey Ark + The Quicksilver Kings + Emma Fee
Start your easter weekend early at an evening of sublime acoustic music with Pavey Ark, The Quicksilver Kings and more.Pavey Ark
Pavey Ark are currently recording their second album and will be playing these new album 2 songs, plus a few favourites from their debut album.

Pavey Ark are an alternative indie-folk band from Hull. Atmospheric vocals and strings glide over finger-picked guitar, melodic bass and complex percussion. The result is a beautiful cinematic-folk sound that evades immediate comparison. Upon further listening, the band’s influences start to reveal themselves. From the laid back 60’s folk of Jack.C.Frank and Rodrigues through to Nick Drake, This Is The Kit & Radiohead. Their debut album “Close Your Eyes and Think of Nothing” was released in March 2020 just as the Covid lockdowns began. Despite the challenging timing, the album received wonderful reviews from the national music press including UNCUT, Record Collector, Folk Radio and BBC 6 Music airplay form Mark Radcliffe and Chris Hawkins. Pavey Ark’s are currently recording their second album and is due for release in 2022.

Folk Radio “Pavey Ark set themselves up as a simple folk band then pull the rug out from under your feet. It is a perfect antidote for these uncertain days. A call to arms from a band that demands to be heard”

The Quicksilver Kings are an acoustic trio from Hull, UK, who weave elements of country, folk, blues and pop over vintage rootsy songwriting.
Their sixties-inspired, hook-laden songs will leave you wondering if you’ve heard them before and determined to hear them again.

Keith’s vocal style is reminiscent of old classics like Buddy Holly and The Everly Brothers yet has a freshness to it that never fails to blow people away.

Emma Fee
Singer-songwriter Emma Fee has been performing in and around her hometown Hull for many years, often with her band Happy Endings. Her music has been described as being evocative and melodic, drawing lyrical inspiration from everyday experiences. Influenced by everything from The Beatles to Bright Eyes, Emma’s acoustic performances are honest, sometimes melancholic, sometimes upbeat and always heartfelt.

Pavey Ark + The Quicksilver Kings + Emma Fee (Hull Adelphi) at The New Adelphi Club event tickets from TicketSource
This website uses cookies to improve user experience. Please confirm that you accept the use of cookies. More information can be found in our cookies policy. Find out more.