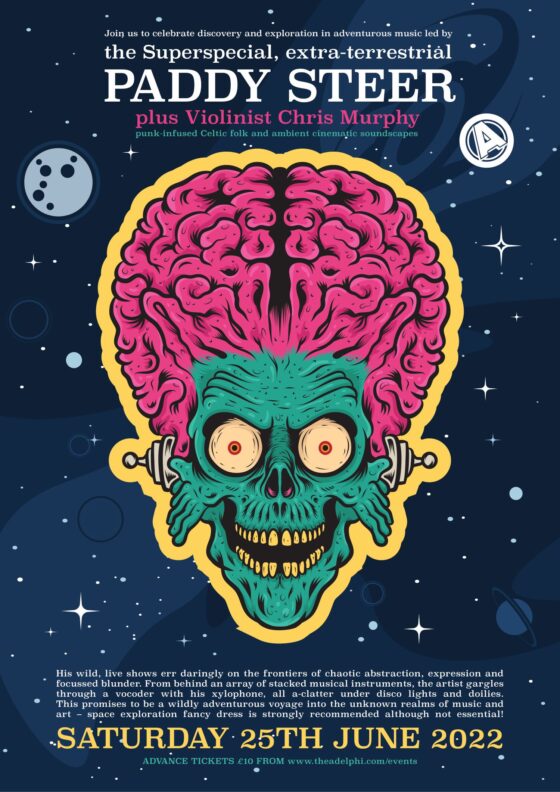 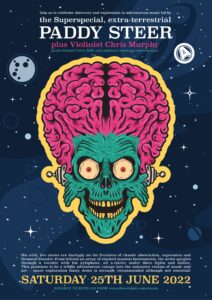 Paddy Steer is a Zelig-like character along the timeline of Manchester’s musical activity. It’s a testament to his musicality that he has played with such a wide range of music and artists over the years, be it as a bass player, drummer, Hawaiian guitarist etc. or all these roles at the same time.

In rejection of the notion of ‘immaculate reproduction’, live performances from Paddy’s own project err more daringly and admirably on the frontier of chaotic abstraction, expression and focussed blunder, dice rolling down the hill in case of duende, as from behind his stacked array of instruments, the anarchically intrepid punk gargles through a vocoder with his xylophone, all a-clatter under disco lights and doilies.

He creates his tools, as he creates his craft, here from scratch, there from new, ever from long-garnered experience that includes running the massive ensemble Homelife, years hence. In style he is unique on the circuit that knows him, on which similarly his blinkered resolve and capacity to create must be unparalleled.

This has been reduced down over a long period of time, and applied coat by coat with subtle mastery, for richness, depth, and vivid texture, as if it were some magnificent curry, or a samurai sword. Lounge, romp, deep groove, homely and galactic-expedition whimsy, furry electronic invention, it feels akin to playing and winning a computer game made from reality, to hear.

“sounds like a Swiss cuckoo clock made of egg boxes and horsehair, glued together by an African Moog player in a Vietnamese iron monger’s shop”. (Graham Massey) 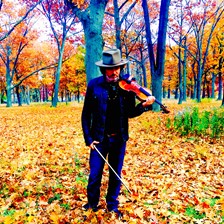 For 25 years, and with no sign of slowing, violinist Chris Murphy has made a living by writing, performing and recording original music. For Murphy, the path forward is charted by looking backward, to the troubadours and minstrels of ages past. Born into an Irish-Italian family near New York City, Murphy was surrounded by the disparate and eclectic sounds of his neighbours’ traditional music. “I heard and was influenced by everything – from Italian-mandolin music, to bluegrass and folk, to Latin music,” he says. Inevitably, he discovered rock ‘n’ roll, claiming still further influence from some of rock’s most adventurous and eclectic icons: Lou Reed and Ry Cooder, Bob Dylan and Richard Thompson. But it was when hearing David Lindley playing violin with Jackson Browne that he realised where is path lay.

Murphy finds his element on the stage, where spontaneity and improvisation reign. “To me, the music is liquid, and I’m looking to have some kind of experience,” he says. “I’ll twist and turn, and hammer and mould, and shape, cut and paste the music to do that. We’ve never done a song the same way twice.”

Chris Murphy prides himself as being a flexible musician, one able to deliver spirited, punk-infused Celtic folk as easily as he does ambient cinematic soundscapes, and as at home carrying the show as a solo player as he is leading a band.

What never changes is the showmanship and charisma on display and if you find yourself at one of his shows, no matter what the format, you are guaranteed a night of unique, infectious and thoroughly rewarding music.

Chris Murphy is back in the UK in June 2022 for a month long tour taking in intimate gigs and large festivals, lively pub gigs and seated art centres, workshops, support slots and everything in between. Last time he hit those shores he felt like a discerning music lovers best kept secret, this time around it would seem that the secret is out!

Amy Precious and Kev La Kat ‘s new outfit having performed their brilliant debut show at Adelphi a few weeks ago followed by shows at Dive, Polar Bear and Arthouse. We love them and so will you. Expect dancing.