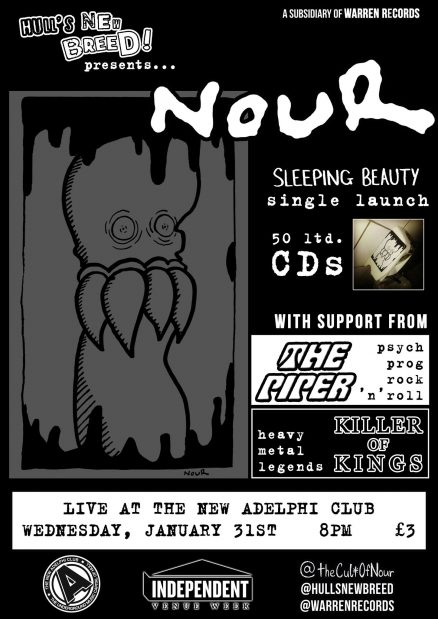 Nour + The Piper + Killer Of Kings

TICKETS AVAILABLE FROM THE BANDS

NOUR is a 3-piece alternative-rock / punk band from Hull, England.

With influences spanning the alt-rock genre, the band produces a blend of familiar styles, with an added experimental twist, likened to Fugazi and Agent Orange.

Their eclectic live set encapsulates psych, shoegaze, hardcore punk, doom, and indie, alongside loud / quiet dynamics more reminiscent of ’90s rock. The band aims to evoke the spirit of their idols Hüsker Dü and Nirvana, without being merely another stale copycat. Contemporary British acts, such as Forever Cult and Basement, inspire not only a part of NOUR’s sound, but also their DIY ethic.

Making their live debut, we have this hotly-tipped 5-piece, formed from the remnants of The Queen Riots. Expect experimental psychedelic, prog rock’n’roll, influenced by the late ’60s underground psychedelic scene. Having these guys play a HNB show for their first ever gig is an honour, and we look forward to plenty more in the future!

Resurrecting the sound of classic nu-metal, Killer of Kings are an explosion of heavy riffs, piercing vocals (from two lead singers!) and unparalleled stage presence. Their highly engaging live show has seen this band grow an impressive fanbase in their first year on the scene. We’re stoked to have them on a HNB lineup at last!