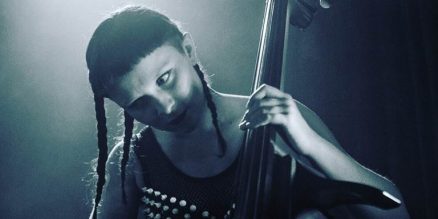 NINA HARRIES
Nina Harries is a stunning double bass player and superb vocalist. Born into a family of musicians she studied at a prestigious conservatoire before breaking out into the UK festival scene.

Combining the lowest of the low and the highest of the high her music is inspired by western & indian classical music, edm and folk. She is currently touring internationally with world-renowned Bangladeshi dancer Akram Khan, as part of his final solo production Xenos. She will be taking a break to return to the New Adelphi Club in The City of Hull to perform her solo material.

Nina will introduce you to an instrument you will doubtless recognise, but have seldom seen in the spotlight. It’s guaranteed you will never have heard the double bass played like she does!

Her debut album untitled, composed by Nina and arranged by her and her brother Joel Harries is in final production and will be released in mid 2019

THE EVIL LITTER
The two founding members of The Evil Litter are Claire Scott and Leon Welburn. In their usual guise they are a raucous three piece post-punk groop. Their alter ego is a seductive completely deconstructed lo-fi acoustic experience with echoes of Leonard Cohen and Jacques Brel. A performance of quiet reserved power and on display at AWAYKE 18.

This very special stripped to the core performance will combine the enigmatic female lead of Claire and subtle harmonies of Leon. The songs are dark humoured nods to characters they have met from the past. Seeing as it is Christmas they’ll even have a Christmas song ready for you! All songs written within a ‘twenty minute rule’.

SARAH SHIELS
Over the past 5 years Sarah Shiels has been making a name for herself. She has performed extensively across the UK and Internationally and toured England with ‘Jackson D’ and ‘Rivers Johansson & The Deemed Unrighteous’ as well as playing Seattle, Spain and Germany with ex blues-punk band ‘Ming City Rockers’.

Last year she embarked upon a project of psychedelic folk and blues with a new band, debuting at Beverley Folk Festival. They went on to support the likes of ‘Curtis Eller’s American Circus’ as well as the acclaimed ‘Jeffrey Lewis’.

Recently, she played with garage rock and roll outfit ‘The Black Delta Movement’, and throughout 2018, toured the UK and Europe. ‘.