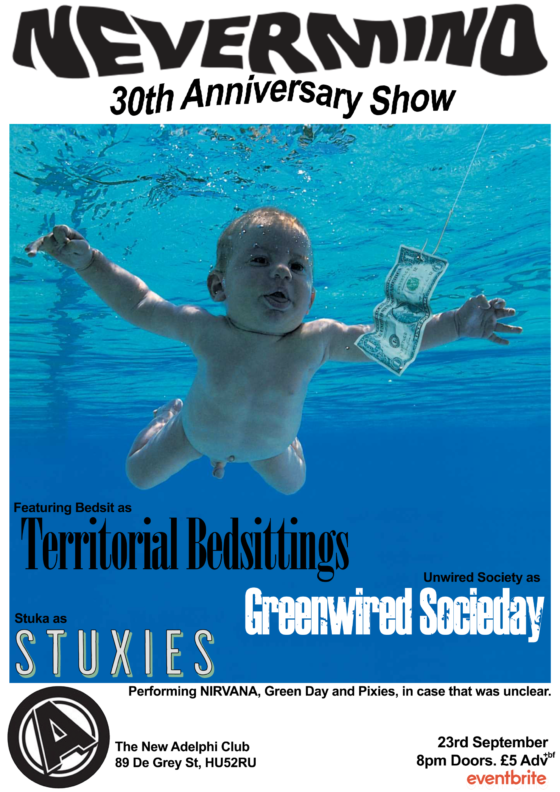 Pefrorming the songs of Nirvana, Green Day and The Pixies incase that was unclear! 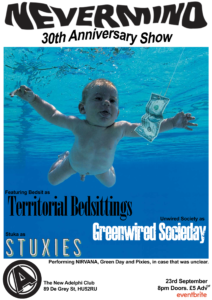 Hull-based grunge outfit Bedsit will be performing Nirvana’s ‘Nevermind’ live, in its entirety, at a special one-off event at the New Adelphi Club
About this event
Territorial Bedsittings – (Bedsit performing Nirvana)
In 1991, Nirvana’s “Nevermind” was unleashed to the world. An unparalleled hybrid of contagious, visceral punk and earworm pop melodies, it was soon being recognised as a much-needed breath of fresh air to a rock landscape that had become stale and unoriginal. With the MTV and radio hit “Smells Like Teen Spirit” making waves unlike any lead single in living memory, Nirvana became the face of ”the Seattle sound” that would eventually be known to millions as “grunge”. Nevermind flew off the store shelves, and is now considered a classic record, adored by millions around the world to this day.
This year marks the 30th anniversary of the album that brought alternative rock kicking and screaming into the mainstream.
In celebration, Hull-based grunge outfit Bedsit will be performing the album live, in its entirety, at a special one-off event at The New Adelphi Club.
Greenwired Socieday – (Unwired Society performing Green Day)
Continuing the theme of 90s rock giants, Unwired Society bring you a slab of Green Day’s most well-known tunes from across their expansive career, spanning over three decades. After Kurt Cobain’s tragic death in 1994, Green Day took the baton, bringing punk subculture to the masses for years to come.
Stuxies – (Stuka performs Pixies)
Late 80s albums from Pixies, such as “Surfer Rosa” and “Doolittle” were influential on Nevermind’s sound, and helped pave the way for alternative rock’s chart dominance in the early 90s. Hull’s very own Stuka will be dipping into the Pixies catalogue to round off this fantastic celebratory line-up.
Nevermind 30th Anniversary Tribute Show ft. Bedsit Tickets, Thu 23 Sep 2021 at 20:00 | Eventbrite
This website uses cookies to improve user experience. Please confirm that you accept the use of cookies. More information can be found in our cookies policy. Find out more.