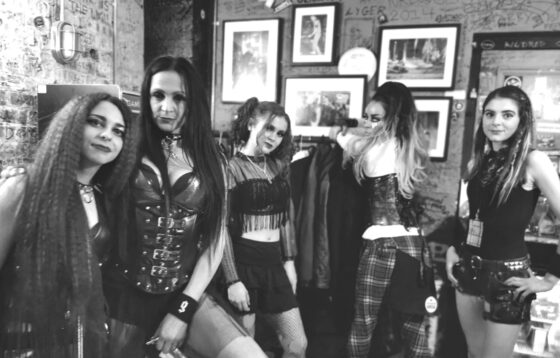 Nancy and the Dolls + Desensitised

Screaming Tarts presents…
Nancy and the Dolls + Desensitised
Saturday November 27th 2021. The New Adelphi Club, Hull.
‘Nancy and the Dolls’ are an all female rock band, formed in 2014 under the name ‘The Sex Pissed Dolls’.
After exploding onto the scene, the band quickly gained a reputation as a must see live band with a great set list and a high energy musical performance that few could match. An enormously successful 2015 tour followed and by July 2016 they were asked to perform at the official after show of the FORMULA 1 British Grand Prix with ‘Texas and The Feeling’.
​
By 2017 the girls were performing a number of shows and festival headline spots as part of their Avenging Angels Tour. Their originality and their own spin on classic covers attracted the attention of John Giddings, who kindly asked the girls to open the IOW Festival in 2016. Following their incredible performance at the Isle Of Wight Festival, they were invited straight back, this time elevated to the Main Stage to perform alongside Run DMC, Kaiser Chiefs and David Guetta.
Initially the band covered songs by The Clash, The Sex Pistols, Buzzcocks, Nirvana and many other rock and punk legends.
In 2016 however the band diversified into writing their own music. Their debut EP ‘Maniac’ was recorded at Real World Studios alongside producer Steve Brown (The Cult, George Michael and Manic Street Preachers).

​2020 is a new chapter for the girls with the new name ‘Nancy and the Dolls’ which now enables the band to get air play ( being pissed was a problem) the girls are ready to launch a new tour with new material alongside a new original single.

Support from Desensitised, all female rock trio from Nottingham with new album ‘Sister Psychosis’ out now!

£15
https://www.seetickets.com/…/the-new-adelphi…/1521163
PLEASE NOTE – This show has been rescheduled from Saturday December 5th 2020 at The Welly Club due to the Coronavirus outbreak. All original tickets remain valid for the new date, refunds available for those unable to attend.
This website uses cookies to improve user experience. Please confirm that you accept the use of cookies. More information can be found in our cookies policy. Find out more.