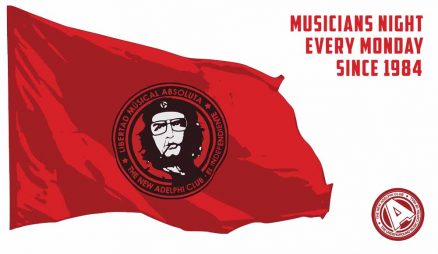 When a performer has an exceptional night, we sometimes say he or she “left it all on stage” — the “it” being effort, energy, passion, sweat. To close a concert with a raw throat and a rumpled appearance signifies full disclosure, proof that the person on stage has held absolutely nothing back. Diane Cluck’s performances, at their best, take a near-opposite approach: unfolding melodies of winding complexity without the barest hint of strain or struggle. A rich 15-year recording career precedes this year’s Boneset, as thrilling a showcase of Cluck’s clawed, counterintuitive fingerpicking and elastic voice as anything she’s ever released. Witnessing the same process live, however, jams the senses — it’s almost easier to imagine some tiny spirit in her chest is controlling the action, turning a pitch wheel with one hand and a tone knob with the other. In three songs at the Tiny Desk (two from Boneset and a sparkling new piano number, “Grandma Say”) she broke focus only once, to answer a question as she strapped on a set of ankle bells for the set closer, “Sara.” The bashful smile that attends her whispered reply — “I got them on eBay” — is a privilege to witness. –DAOUD TYLER-AMEEN