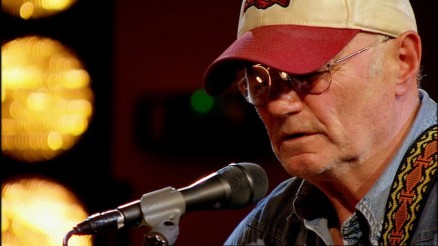 Michael Chapman with BJ Cole and Sarah Smout.
Support by The Brackish

One of England’s foremost outsider song stylists – the great Michael Chapman – marks 50 years since his first live performance! A self-styled old white blues guy from Yorkshire and one of the most under-rated heroes of our time, Chapman performs tonight with pedal steel guitarist, BJ Cole, and cellist Sarah Smout.

“Chapman has released upwards of 35 albums since his debut in 1969, which is a remarkable figure in itself; but to have suddenly found this new direction so late in the day, and to have inhabited it with such dexterity and force gives the game a whole different arc. If it wasn’t already so explicitly linked to Fahey you’d wonder if that most haunted and most haunting of figures had found some way of re-incarnating his damn(ed) self.” – The Liminal

Michael Chapman
A self-styled old white blues guy from Yorkshire and one of the most under-rated heroes of our time. Chapman’s uniquely English melancholic perspective and emotive guitar style first won him the admiration of John Peel and then more recently kindred spirits Jack Rose and No Neck Blues Band. He toured the UK in February 2013 playing solo and in duo with Sonic Youth’s Thurston Moore.

The guitar and voice of Michael Chapman first became known on the Cornish Folk Circuit in 1967. Playing a blend of atmospheric and autobiographical material he established a reputation for intensity and innovation. Signed to EMI’s Harvest label he recorded a quartet of classic albums. LPs like ‘Rainmaker’ and ‘Wrecked Again’ defined the melancholic observer role Michael was to make his own, mixing intricate guitar instrumentals with a full band sound. The influential album ‘Fully Qualified Survivor’, featuring the guitar of Mick Ronson and Rick (Steeleye Span) Kemp’s bass, was John Peel’s favourite album of 1970. ‘Survivor’ featured the Chapman ‘hit’, “Postcards of Scarborough”, a characteristically tenderly sour song recounting the feelings of nostalgia and regret.

A lively and accomplished improviser, Michael gained a reputation for re-working material, both before an audience and on record. Songs were seen as standards, themes to be explored, extended and varied on stage and in the studio. The Don Nix produced ‘Savage Amusement’ featured versions of the Chapman songs “Shuffleboat River Farewell” and “It Didn’t Work Out”. Different musicians and a different sound breathed new life into earlier material, showing Michael to be a jazz musician in spirit if not in sound.