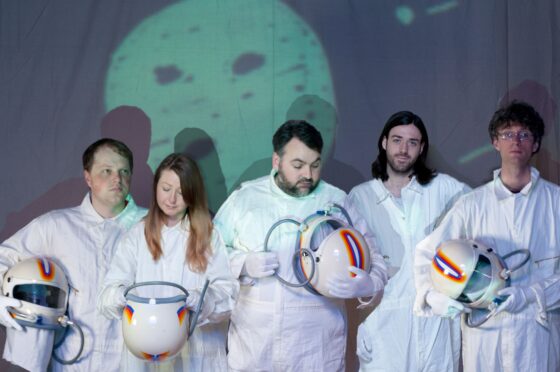 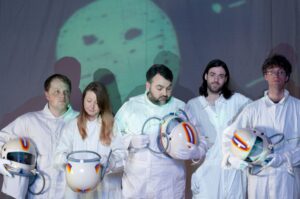 Mi Mye hail from the far north of Scotland and Wakefield (the centre of Indie pop), England, playing (mostly) indie alt-folk. They are sometimes just lead songwriter Jamie Lockhart and sometimes a mixture of Emily (flugelhorn, synth, sampler), Rob (drums), Sam (bass), Chad (guitar) and Morgan (keys). Lyricist and fiddle player Jamie learnt to play in the Highlands, and often leans on his roots of folk music and story telling to produce beautiful songs of empathy and hope. When joined by the band, which he will be for this show at Adelphi, they weave intricate arrangements with Jamie’s beautiful stories and layers of harmony, producing a bunch of cool indie synthy dreamy bangers

Mi mye have released 5 Studio albums. They have had radio plays from Lauren Laverne, Mark Riley, Tom Robinson, Tom Ravenscroft, Gideon Coe and Emily Pilbeam and played sessions on Marc Riley and BBC introducing. The band have played all over the UK and shows in Italy and Barcelona, and have played festivals like Blue Dot, Kendal Calling and Deer Shed.

Mi Mye have been compared to Sparklehorse, the National and Will Oldham.
Nice quotes
Praise for ‘The Mountain Forces The Future, And The Force Causes The Rain:

This musical collective from Hull and York, UK make mellifluous sounds which have been clinically proven to reduce the heart rate and encourage leaning back into a comfortable chair and taking it easy. Tunes are available on the usual streaming platforms

Lewis is a rough-hewn heavy set muso with a talent for writing exposing heartfelt lyrics and gut-churning one-liners.