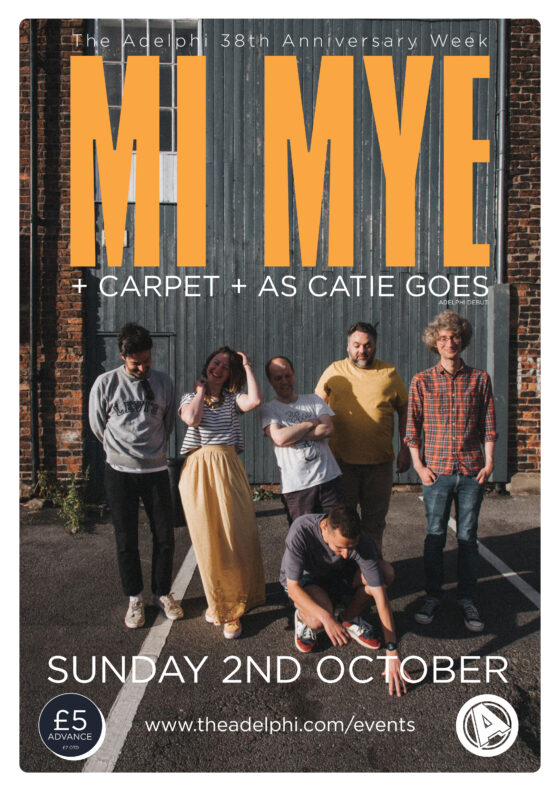 Mi Mye are releasing two different records both on the same day, and will be celebrating this with a tour in Autumn 2022. One is 5-track EP “The Bow Saw and the EQ” and the other is album “My Name&#39;s Wimp”. These two records have evolved side by side of each other, one is the best friend of the other, and therefore it felt like they should appear at the same time.

We are super excited to be taking them out on tour and sharing them with the world. We have been busy releasing singles all year, with It Hurt Me/It Hurt Emily in February and Party in March as standalone singles. In June, July and September singles from the EP have been lovingly dripped into the world, ready for our big EP/album release tour in Aug-Oct 2022.Primarily a fiddle player, guitarist and lyricist, Jamie learnt to play in the Highlands as a child (including tutoring from Scottish Traditional Music Hall Of Fame member Alisdair Fraser) and often leans on his roots of folk music and storytelling to produce beautiful songs of empathy and hope.

These often combine with the influences gathered from an adult life in Wakefield (the centre of indie pop), creating music that can be both tender and melodic with more ambitious and idiosyncratic arrangements and production. Mi Mye have been compared to Sparklehorse, the National and Will Oldham.

“Like Belle and Sebastian, if the listened to Pavement” – unknown.

Carpet is the moniker of musician and recording-engineer, Rob Slater. Slater’s songs offer a deep commitment to introspection that unsettles, but also somehow comforts, with sure-footed movement through the hidden lives of thoughts most of us let pass without questioning. Although some remnants of Slater’s noisier past remain (The Spills), sitting in a steady landscape of uneasiness Carpet is laced with a softer kind of angst, worn like a gift – the last scrapings of 20s torment, held delicately in their disquiet. Crafted in his own Greenmount Studios, largely in solitude bar some appearances from close friends, Carpet is the product of Slater returning to the freedom, mystery and magic that first attracted him to recording on a 4-track cassette recorder as a teen – bringing the spirit of lo-fi bedroom recording into the studio, along with that initial excitement and exploration of the ‘home demo’. As an engineer, Slater has worked with countless artists over the last decade (recent projects include Yard Act, Thank, Jake Whiskin, as well as his own bands Mi Mye and Crake). In-between these sessions he spends his time alone, working up songs from his home-demos onto a beloved 16-track 3M 2” tape machine – a process that Slater has become quite familiar with as well as fond of.