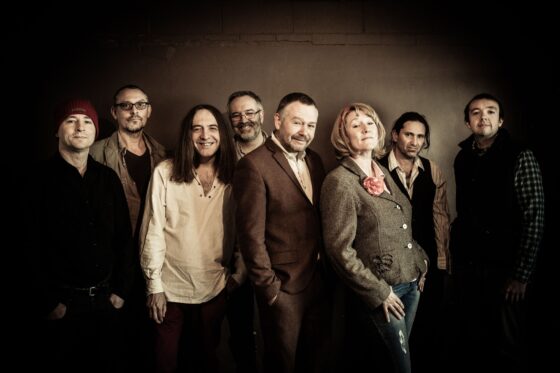 Native to the North-West of England, the 8-piece musical charabanc was built from the embers of the much-loved folk-punk band The Tansads, before developing a life and feel all of its own. Their energy and passion is complimented by their love of what they do and desire to share hope and togetherness with as many people as are willing to listen. Through 6 well-received albums and hundreds of gigs, they’ve offered voices of hope and beacons of light to anyone valuing both melody and positive humanity.

Combining their love for world music, they have collaborated with top Indian musician Kuljit Bhamra OBE, and members of Britten Sinfonia at The Bhavan Centre, London. No strangers to large venues, Ranagri have performed at Birmingham Symphony Hall, Fairfield Halls, The Union Chapel, Buxton Opera House and Camac Harp Festival in France to name a few.