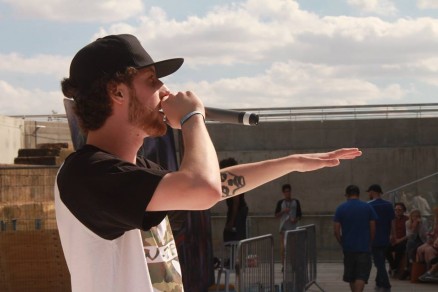 For the start of his tour commemorating the release of his debut EP, Hull’s newest recruit into the hip-hop scene Marx is playing his first headline show at the legendary Adelphi, with support from legendary local punk rockers System Paralysis, the bluesy bastards in the Froot ’67, and the punk/folk singer who’s angry at everything, all the time, Casey Stevens!

Hull based emcee Marx, alternative hip-hop with a blend of hardcore, witty, socially and politically conscious lyricism. For the past three years Marx has been playing gigs around the country, performing in the heavy metal and punk rock scenes. In both bands, Marx made no secret of his hip-hop influence, making use of rapping in both, and has now flipped it around, putting his punk and metal influences towards rap tracks. After performing on stage with Big Daddy Kane in 2015, Marx felt like he had to do something with the music he was writing, and set about pursuing hip-hop full time.

Combining genres like Metal, Ska and Reggae with strong Punk undertones, System Paralysis have a distinctive sound which delivers powerfully on the stage. Since forming in 2010, System Paralysis have conquered their local punk scene in Hull. They have played alongside bands such as: ‘English Dogs’, ‘UK Subs’, ‘Random Hand’, ‘Stiff Little Fingers’, ‘Leather Face’, and supported the ‘Freaks Union’ reunion-gig in 2015. Meanwhile they have performed at prestigious festivals such as: ‘Humber Street Sesh’, ‘Swinefest’, and ‘Tribfest’, each time with a brilliant reception. System Paralysis have also aired on local, national and international radio stations including: ‘Real Punk Radio’, ‘TNS Records Radio’ and ‘BBC Introducing’. Currently promoting their third and most ambitious album yet – ‘Concrete Gore’ -System Paralysis are always looking to play anywhere in the UK, and planning on breaking into Europe soon.

60s Style Progressive/Psychedelic Rock with a Bluesy Edge. The Froot ’67 were formed in late 2013 by rhythm guitarist Louie Donoghue and bassist Stevie Newby. Later accompanied by the likes of Mr Penrose (Lead Guitar) and Newton (Drums), and played many a folks tune. They soon thought ‘ah we can write a tune too’, and that they did, 6 in fact, all here to listen to with your ears. https://youtu.be/nk0s5ALhoJE

‘I haven’t been moved by an album this much since I heard ‘Dark Side Of The Moon’ by Pink Floyd for the first time’. – Sal Wilcox, Sounds Of An Eccentric

My name is Casey Stevens/The Angry Folk and I am a solo acoustic artist. I play in a fast folk acoustic punk type of style and also sing (sometimes fast and sometimes slow depending on the song and meaning).
I tend to sing about things that are going on in our current world and problems which I see with our current state (From drones used to spy/kill innocent, fracking, resource crisis, conflict, the fact that there are rich throwing away money and people dying on our streets etc.).

I have gigged all over the Hull area in a number of venues with countless amazing acts.
You can find some of my quick home recordings of a small number of my original song on YouTube at: youtube.com/user/caseystevensmusic