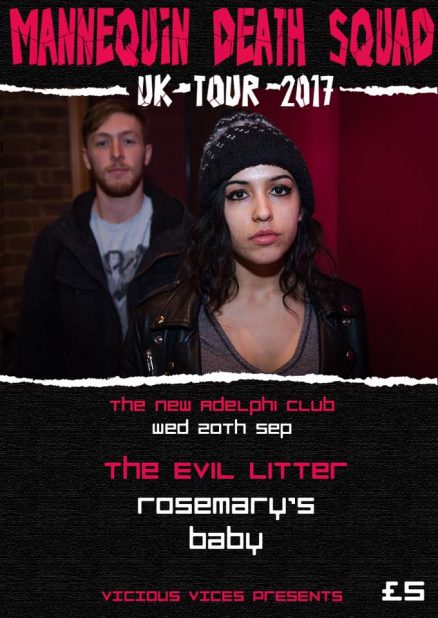 MANNEQUIN DEATH SQUAD are one boy, one girl, from Melbourne, Australia, lost somewhere in between The Melvins and Taylor Swift. They swap instruments, because they are greedy and confused.
They seem to exist in a strange place, one where bubble-gum pop meets scuzzed-up garage punk. Equal parts melodic sweetness and light, and squalling garage rock fury; a clash of sound, culture and ideologies from the smoking ruins of which rises a totally unexpected sound, one that is probably best described by referencing their own lyrics: “cigarettes and soda pop.”

THE EVIL LITTER are a loud, garage three piece from Hull, UK. Combining enigmatic lead and backing vocals with heavy thrusting guitars and polyrhythmic drums, the band are made up of former members of BBC Introducing and BBC6 Music play-listed bands Mammal Hum and The Patrick Joseph Tobin Band.

The band write to a strict ‘Pop Art’ rule, whereby each song is devised and written in twenty minutes, ensuring a raw and immediate presence. Their stage energy is as intense as the songs lyrical and musical content, thundering through an atmospheric and catchy set that leave the crowd wanting more.

ROSEMARY’S BABY are a local acoustic sibling due and are the show’s openers. Describing their sound as riot growl, they’ve made significant waves, gaining favourable reviews for open mic appearances and support slots, as well as some good old-fashioned busking.