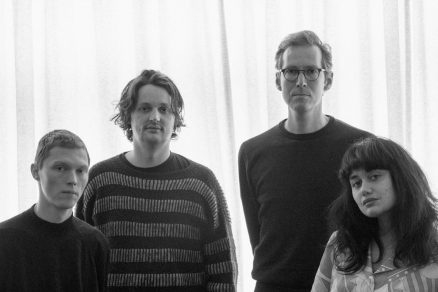 The Adelphi proudly presents a delicious sandwich of bands from The Netherlands and Canada, spanning genres from electronica to post-punk

LEWSBERG from Rotterdam are a four-piece rock group named after writer and fellow Rotterdammer Robert Loesberg, famous for his dangerous novel Enige Defecten from 1974 (never translated). That is the greatest source of inspiration for the band: the counterculture and big-city cynicism of the 1960s and 1970s. After putting out The Downer (ep, cassette) and Non-fiction Writer (single, 7”) in 2017, Lewsberg will release their self-titled debut full-length on April 13th, 2018. Nine rudimentary and repetitive rock songs, full of a tough, nonchalant intensity. The English lyrics, delivered with a heavy Rotterdam accent, show a tendency towards existentialism and black humour.

“Lewsberg are one of the more interesting bands to come out of a city currently enjoying something of an alternative musical renaissance. Lewsberg are exponents of a measured, arty-but-inquisitive sound that is slightly at odds with the brazen racket made by the likes of their city peers. Those who dig […] the Velvet Underground or that very early Modern Lovers sound will surely be drawn to this.” – Louder Than War (UK)

“A fresh delicacy and bedsit-poet romance is emerging from the misty ports of Rotterdam.” – Gigwise (UK)

LAL is an electronic music duo based in Toronto. Through their exploration of a dynamic range of diasporic rhythms, LAL have developed a sound that ingeniously integrates their South Asian and West Indian roots with jazz sensibilities, hip-hop and authentic soul – all encased in a fresh and eclectic electronic sound.

Socially conscious politics have been the bands foundation throughout their many musical manifestations. Reflections on social justice movements and societal injustices provide the impetus for lyrics that relentlessly cut deep and are presented as pure poetry. Solidifying a persistent theme throughout LAL’s evolution: peace, power and politics through creative conversation, action and – inevitably – dance.

VENUS TROPICAUX is gusto, squalor, delirium, bliss and mischief in all its raw, unfiltered noisy brilliance.

Within their succinct 20-minute sets, these Rotterdam post-punk firebrands create a deliciously haywire pocket universe to call their own. Abrasive and hook-heavy, cheeky and austere, Venus Tropicaux is an equation that by any means shouldn’t make sense, but somehow does because of the unique chemistry between four individuals.

You can’t help but be charmed by the reckless abandon and joyful spontaneity Shelley Emily (voice/guitar), Shalita Dietrich (voice/bass), Zacharias Danson (drums/looks) and Joris Frowein (keys/love) nosedive into this band-thing. Venus Tropicaux ‘s exciting EP Lycra Pants finally captures this singular energy in all its untethered glory. Delirious yelps and chants lash out like sharp talons, as the fiery guitar bursts and crude drum patterns detonate with the haphazard intensity of a firecracker.