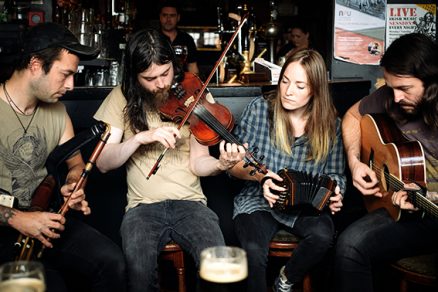 ‘They do mark a turning point in folk… that authentic voice of the streets is back in a big way.’
Mark Radcliffe

‘Anarchic, yet connected, rootsy and gutsy… I love their music, it is just so damn good!’
Mike Harding

‘The most convincing folk band to come out of Ireland in years.’ ★★★★★
The Guardian

‘The most exciting album of traditional Irish song in decades.’
TradConnect

‘A sure contender for any Irish album of the year lists.’
Songlines

Lindsey Simpson is an eccentric stage performer with excellent crowd control and an eclectic mix of Blues and Country. He has an impressive list of folk festval appearances under his belt, and supported the likes of Ali Bain & Phil Cunningham, Michael Chapman and John Tamms & Barry Coop to name just a few.
His songwriting keeps audiences often silent as they listen to the stories of intrigue and messages that are put across. With a mix of old style blues, country and humorous lyrical content Lindsey is fast becoming one of the UK’s most entertaining musicians