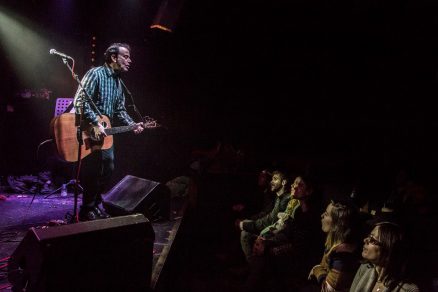 Lach returns to The Adelphi as part of his Spring Antifolk tour! Songwriter, beat poet and raconeur,

Lach is the founder of the Antifolk music and art movement and star of BBC Radio 4’s hit series ‘The Lach Chronicles’. Support from Black Kes and others.

As a songwriter Lach founded the Antifolk art and music movement, which is cited as a main inspiration by hundreds of performers today from Beck and Jeffrey Lewis to Hamell on Trial, The Moldy Peaches and Regina Spektor in the US to the likes of Laura Marling in the UK. Lach has released six albums, as well as a new book of poetry to be published in January 2015 and a regular series on BBC Radio 4 called The Lach Chronicles which is currently on its second season.

Lach came to Greenwich Village (New York City) in the early 1980s, heading straight for Folk City. However it seemed Lach’s renowned punk/folk style was not welcome and so he moved to the Lower East Side, opening his own illegal after-hours club, The Fort. The same week Lach opened The Fort, Folk City held the New York Folk Festival, and so, Lach held the first New York Antifolk Festival. The first wave of Antifolk was born.

Now based in Edinburgh, Lach has been deeply involved in the city’s cultural scene – as executive producer of Henry’s Cellar Bar, in residency at Summerhall and in 2016 he was named creative director of The New Wee Theatre. He has starred in three series of ‘The Lach Chronicles’ for BBC Radio 4, and published a book – “The Thin Book of Poems”

“…like a Lower East Side rendezvous of Bob Dylan and Patti Smith. Like black snow, stalled subway cars and random violence, Lach is a Manhattan institution.”- NY Times

“Lach is incredibly bright, influential, funny, and he’s got his own, sort of, counter-culture charm. He is part of New York folklore.”- Suzanne Vega

“Lach is so what the East Village used to be all about. He’s a gruff-and-tough punk turned poet with a heart of gold.”- Timeout New York

Like a pound shop Flaming Lips, infamous skiffle-ruffians Black Kes bring you more fun per square inch than a troop full of baboons in a ball pool. Hull’s – nay, the country’s – premium Avant gard /chicken in a basket rock n roll cabaret entertainment – guaranteed to thrill and entertain you.