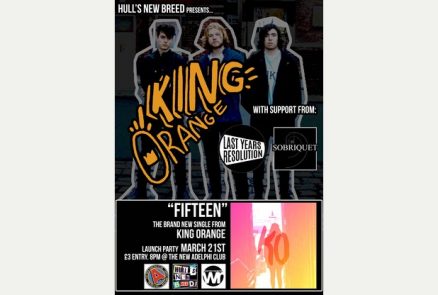 Hull’s New Breed presents King Orange, with their new single “FIFTEEN”. Plus support From Last Year’s Resolution and Sobriquet “Fifteen”, the debut single from King Orange is set for worldwide digital release on Tuesday, March 21st, on alternative / punk label Hull’s New Breed. To celebrate, the band have announced a headline show at The (world-famous) New Adelphi Club. Formed in 2015, the band have proven themselves a force to be reckoned with in the local music scene, as well as further afield. But this month’s show promises to be a landmark gig in the young band’s career, as they drop their debut single, “Fifteen”, recorded at Hull’s AOO Studios. A firm favourite amongst fans, Fifteen is an eclectic mix of contemporary rock with upbeat dance vibes, and deep, baritone vocals. The band will be supported by local alt. / punk outfit Last Year’s Resolution, as well as Sheffield-based post-hardcore act Sobriquet. “Fifteen” is available worldwide from March 21st on iTunes, Spotify and all major music sites, via Hull’s New Breed, a subsidiary label of Warren Records. £3 entry