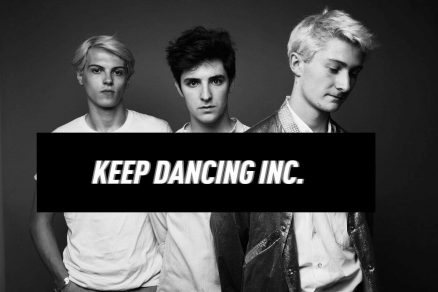 KEEP DANCING INC.
From the outskirts of the Parisian capital comes a delightful trio named Keep Dancing Inc. with plenty of potential to spare for a great export band like France hasn’t had in a few years. Charles, Louis and Joseph churn out some real tasty tunes. These twenty-somethings have the knack, DIY approach and fresh splash you’d expect from such a young age. They met at a Palma Violets concert and brilliantly decided to make music together based on the common influences they had and adored : The Smiths, New Order, Blood Orange and The Drums are a few…

From punk, to synth-pop via some crafty cold wave and surf-rock fusion, the band manages to bring a fresh take on sometimes overlooked essential aspects of a good track. Is it danceable? Is the audience responding when they play them live? Does the fun of playing live trickle down to the audience ? Tick YES to all of those. Keep Dancing Inc. is here to stay and will deliver cracking ‘cold zouk’ tunes (yup, they penned this genre to suit the need for a new sound definition) for summer and beyond.
The band had also quite a following of fan-friends, and you’ll be amazed at their live set and how they manage to communicate/share the passion of their music down to the crowd. Really impressive and nothing like we’ve seen in recent months with live shows.
“The band have rarely played a gig in the French capital that isn’t sold out.” NME.
—
Sweaty Joe
(THEIR LAST EVER SHOW!)
This four-piece alternative band have been a mainstay at the Adelphi over the last year or so, pleasing audiences time and time again and playing as support to many big name touring bands.
JOIN THEM AS THEY SAY GOODBYE TO SWEATY JOE!
Fronted by Joe Bayliss, alongside guitarist Louis Palmer, bassist Antony Darnell and stick man Jack Brown, Sweaty Joe are influenced by the likes of The Beatles, Arctic Monkeys, Queens of the Stone Age and Phil Collins. WE WISH THEM LOOK WITH THEIR NEXT PROJECTS!
—
Vøødøø Dance Party
An electronic/Synthfunk/Ambient/Techno/Disco/House/Alternative/Synthpunk duo from Kingston Upon Hull. Blending elements of electronic music with live instrumentation
Doors 8 pm
£5 otd
This website uses cookies to improve user experience. Please confirm that you accept the use of cookies. More information can be found in our cookies policy. Find out more.