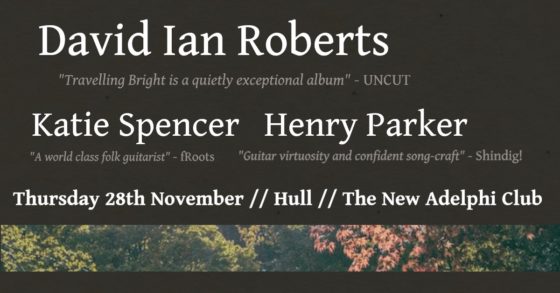 Tickets (E Ticket) £8 in advance available from here:
https://henryparker.bigcartel.com/
£10 on the door

“Travelling Bright is a quietly exceptional album, dreamy and intimate, but borne up on rich elaborate arrangements…. [Roberts] writes deeply introspective songs, and renders them in rich orchestrated widescreen… dreamlike soliloquies, steeped in mythology and the natural landscape, and presented with an airy spaciousness that carves out avenues for the mind to wander.” UNCUT

Drawing on influences such as John Martyn and Laura Marling, Katie Spencer creates modern progressive folk music which
owes as much the songwriters of the 60’s acoustic music heyday as it does the East Riding landscape where she has always felt a
strong spiritual connection. Her striking vocals and deft songwriting are backed by an evocative and complex guitar style that
takes her music to places that are both esoteric and beautiful.

“Katie’s guitar playing has echoes of my dear friend the late great Bert Jansch. Like a musical weaver she threads her poetic lyrics
through the guitar’s strings and produces little tapestries of song.” – Ralph McTell

A devoted guitarist from the West Yorkshire town of Bingley, Henry Parker plays with an intricate finger-picking style that brings to mind the late 60’s folk, psych and progressive rock scenes, with influence drawn from the likes of Bert Jansch, Nick Drake, Pentangle and Fairport Convention. His songwriting lyrically entwines landscapes, people and politics with roots that run deep into the traditional folk songs of England.

“As an album, Silent Spring may be built on and around the folk-infused music of fifty years ago but its message is very much for today. Henry Parker is clearly an excellent guitarist and writer, but he has also not lost sight of the message. He has found his path. Let us walk that way as well. Excellent.“ – Folk Radio UK