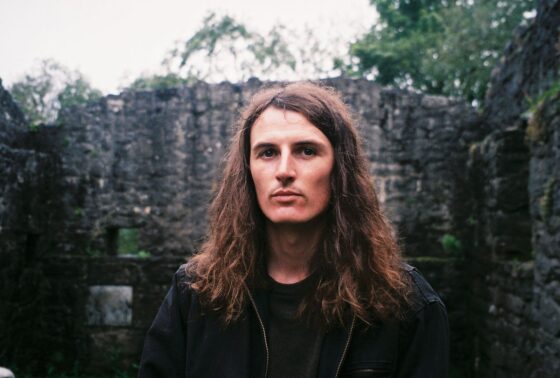 Postponed – This will be rescheduled TBA
Unfortunately this show has had to be cancelled due to a case of Covid amongst the travelling party.
We are looking to reschedule in November…more to follow.

Jim Ghedi hails from the South Yorkshire hills and although clearly well versed in the history of folk music, he stands out as a potential torch bearer for a new generation of respectful yet experimental performers.

Whilst Jim Ghedi’s previous idiosyncratic take on folk has often been instrumental, exploring the natural world and his relationship to it through his music, as seen on 2018’s ‘A Hymn For Ancient Land’. His new album ‘In The Furrows Of Common Place’ is a deeper plunge inside himself to offer up more of his voice to accompany his profoundly unique and moving compositions. Departing away from previous work, here he draws from social-political observations, contemporary songwriting, historical & traditional material and a rich varied number of other inspirations and sources, such as the poetry of John Clare, the writing of Robert Macfarlane and the works of South Yorkshire author Barry Hines.

“Jim Ghedi finds his voice on his new album, superb!”  – ★★★★★ The Morning Star
“A Chastening meditation on Britain in 2021” –  ★★★★ UNCUT
“A starkly beautiful set.. ancient and modern combine evocatively and with grace”  – ★★★★ The Times
“Melodically sublime… although Ghedi’s music is infused with tradition, it’s very much experiencing the present”  – ★★★★ MOJO
“Ghedi at his most bewitching”  – ★★★★ The Sunday Times
“Rich in spiritual socialism, this album is like a poetic stream of magical advice”  – ★★★★ Rock N Reel

Cinder Well is at the vanguard of a different kind of transatlantic folk revival, one forged amidst the uncertainty of a global pandemic. However, Irish-based songwriter Amelia Baker’s music isn’t nihilistic; instead, it strips traditional forms to their bones, creating a meditative, trance-like space for sonic healing. The sparse soundscapes and haunting stillnesses of her new album No Summer (Free Dirt Records) are not meant to be paens to loneliness. Rather, Baker was inspired by the rich musical connectivity of the pub scene in Ireland, and her move from California to County Clare to study traditional music of the region. A member of anarchist folk project Blackbird Raum, Baker’s time on the circuit with Irish trad-punk group Lankum eventually led her to a small settlement in County Clare, and to the rich dissonance of her music as Cinder Well, a dissonance caught between worlds and histories.

Recorded by Nich Wilbur (Black Belt Eagle Scout, Angel Olsen), the original songs on No Summer boldly rub shoulders with careful reworkings of traditional Appalachian sources. Baker’s songs parse these transatlantic traditions, and throughout, her remarkable voice cuts to the bone like some ghostly ballad singer bound to sing these words from here to eternity. From the eerily prophetic title track—which presaged a season of canceled shows—to “Our Lady’s”’s imagined stories of spectral abandoned asylum residents, No Summer is as haunting as it is connected, as dark as it is sacred, a kind of ritual healing that’s existed through the ages.