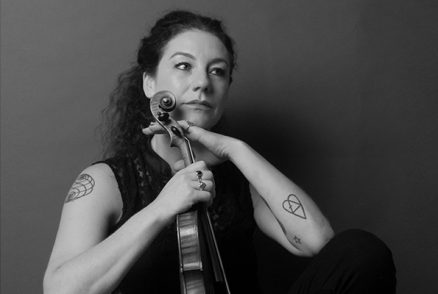 Jessica Moss + support from Phill Wilson (Myonemanband) and Salbo playing a live improvised collaboration.
Violinist Jessica Moss is an integral part of the Montreal underground and independent music scene. Part of the Constellation Records family since it’s inception, she is best known for her fifteen-year tenure in political post-punk band Thee Silver Mt. Zion. She was also a founding member of Black Ox Orkestar, has an long-term creative history with Carla Bozulich, and was a key part of Vic Chestnut’s albums on the label.
Jessica Moss has been blossoming as a solo artist since the release of her acclaimed debut album Pools Of Light in spring 2017. The violinist, composer and singer is newly ascendant as a soloist, captivating audiences with gritty, warmly expressive electronic- and drone-inflected post-classical Minimalism (and sometimes Maximalism), accented by a distinctive melodic sensibility that channels Klezmer, Balkan and Middle Eastern tropes.
“Nothing mattered as she opened things up, drew the curtain back and revealed the stars arranged against the black of infinite space. She was using loops, pedals, effects, she was entirely blowing me away (…) Needless to say, it wasn’t long before the audience had doubled, and was pressed up to the stage, rapt. Jessica Moss solo is a force of nature.” – (Vince Tinguely, CKUT)
On her second album, Entanglement (out in October), Moss channels quantum theory as a metaphor for creating energetic connections through esoteric processes. Using violin (and occasionally, voice) as sound source, her compositions are set in motion like entangled particles – spinning, ricocheting, warping and stretching in extra-dimensional space.
Pre-order now from Constellation
Praise for Pools Of Light:
“A powerful solo effort…visceral and sometimes raw…in her hands, the violin becomes a bountiful source of adventurous possibilities. Though she’s clearly proven herself to be an invaluable team member in other projects, Pools Of Light makes the strongest of all possible cases for Moss’s credibility as a solo artist.” – Textura
“A despairing but cathartic experience…ambitious, expansive and dynamic. After receiving her musical gifts in the context of collaborative projects for so long, listeners should jump on this opportunity to hear her solo work.” – Exclaim 8/10
Doors 8 pm
£10 from theadelphi.com – NO BOOKING FEE!

New
eTickets are on sale through The Adelphi Online Box Office – below.
*The Adelphi does not charge a booking fee.
All tickets are reserved on the door. There is no need to receive advance postal tickets.
Please bring I.D. to claim your tickets.
Doors 8.00pm.

All tickets are General Admission.
Mainly standing. Limited seating. Be early to claim a seat.
We do not process tickets over the phone.
The Adelphi Manager: Mat 07756 992723