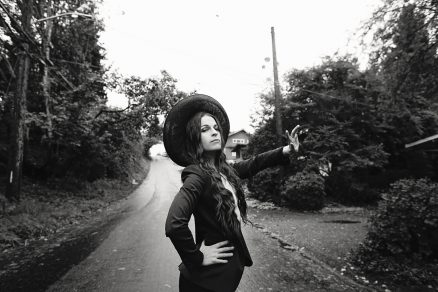 Jesca Hoop is an American-Mancunian singer songwriter with an experimental and provocative pop-folk vibe.

A prodigious musical talent and natural writer with a darkly poetic style, there is something compellingly unique and hard to pigeonhole here. The traditional music business strategy of finding a distinctive style and sticking to it doesn’t apply to Jesca Hoop. Anchored by her finger-picking technique, she rattles from dreamy balladry to skewered folk via clattering percussion and glorious harmonies. Her music taps into the same playful, absurdist take on folk typified by artists like Joanna Newsom and Coco Rosie.

She was encouraged to start a musical career by Tom Waits and Kathleen Brennan, after they employed her as a nanny. She’s grown into to a powerful artist, who released her fifth studio album; Memories are Now, in 2017. It’s an album of stunningly original songs–minimalist yet brimming with energy, emerging from a wealth of life experience, great emotional depth, and years of honing the craft of singing.

In the last ten years, she has released four official studio albums, plus a handful of acoustic compilations, and a duets record with Sam Beam (better known as Iron and Wine). Her debut album featured, among its cast of backing musicians, Stewart Copeland of the Police, and has collaborated regularly with Elbow’s Guy Garvey.

If what she’s called “handshakes and hugs from great people who believe in me” amounted to commercial success, Jessica Hoop would never be off the top of the charts.

“Jesca Hoop’s music is like a four-sided coin… She is an old soul, like a black pearl, a good witch or a red moon. Her music is like going swimming in the lake at night.” – Tom Waits

We really can’t recommend Jesca Hoop highly enough!
Recently featured as part of the London Contemporary Voices Choir, she’s bringing her experimental and provocative pop-folk to The Adelphi on July 17th with support from Sarah Shiels and The Evil Litter.