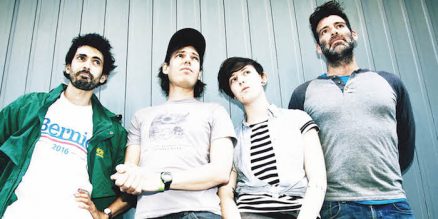 “[Jeffrey Lewis is] The best lyricist working in the US today.” – Jarvis Cocker (Pulp)

“A wordy force of nature… stirs you up with politics or knocks you sideways with sadness… ideas burst from Jeffrey Lewis like an overstuffed suitcase – strange ones, funny ones, poignant ones, usually a mixture…. kicking out ramshackle fuzzbomb jams… it’s difficult to imagine how any couple of hours spent in Lewis’s company couldn’t prove inspirational.” (four of five stars) – The Guardian

“…[F]or me Lewis is as close to unmissable as music gets and he didn’t disappoint, raking brilliantly over the content of several albums (and he’s never released a bad one) and leaving us, among many highlights, with […] perhaps this festival’s greatest moment.” (Ranked #1 in the top-10 favorite sets of Green Man Festival 2014, even beating out Neutral Milk Hotel and Slint!) – Unwashed Territories

Combining folk warmth with garage noise, like if Woody Guthrie fronted Sonic Youth, Jeffrey Lightning Lewis (full birth name) began recording cassettes of his songs in his native New York City in the late 90s.  Some of these songs found their way to the Rough Trade Records label in London (famous indie label of The Smiths, The Strokes, etc); since 2001 Jeffrey has been releasing critically acclaimed albums on Rough Trade and touring the world with his band, currently Jeffrey Lewis & Los Bolts (with Heather Wagner on drums and Emily Mem Pahl on bass).

In addition to headlining tours, Jeffrey has often shared gigs with the likes of Stephen Malkmus & The Jicks, Roky Erickson, The Mountain Goats, The Fall, Daniel Johnston, Devo, Adam Green, Pulp and other luminaries.

The new album “Manhattan,”  mixed by John Agnello (Dinosaur Jr, Sonic Youth, Kurt Vile, Bob Dylan), will be released on Rough Trade in October 2015 – it’s the best album Jeffrey’s ever done, but not the best he’ll ever do.