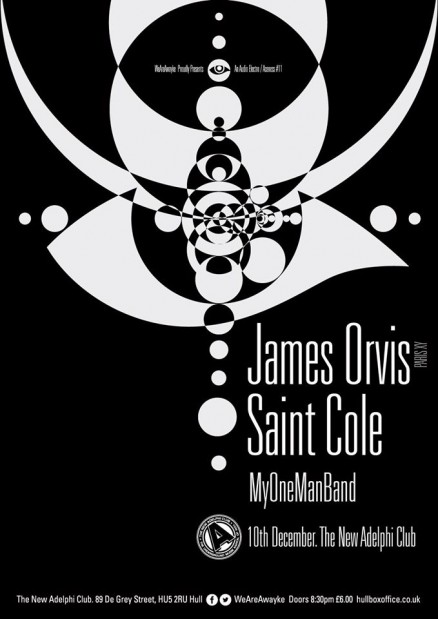 Awayke proudly presents the 11th Instalment of beautiful aceness.
Doors 8:30pm prompt // £6 Advance.
from: https://www.hullboxoffice.co.uk/tickets/buy_ticket/1852
This is our final event of 2016 and we are going entirely electronic. We of course are very excited. I hope you come along.

James Orvis
James’ former project was PARIS XY, a magnificent triumph, and one that launched AWAYKE as a concept in 2014. His new musical engagement bears more emphasis on the live and energetic aspects of electronic music. Combining the core driving elements of House and Techno with the complex organic atmospheres and euphoric melodic arrangements that were prominent in his previous works.

James takes direct influence from the worlds of Philosophy, Science and Spirituality utilising lucid dream states, sacred geometry and both western and eastern philosophies to form concepts for his songs and his emerging visual art. The curiosity of mind expansion and soul searching have brought an ever increasing depth and dimension to his work. He discovered that the act of making music induces similar states to those found in deep meditation and he seeks to pull the audience into a transcendental hypnotic state that results in social connection and euphoria.

This year James stepped outside of his comfort zone to work alongside one of Hull’s most forward thinking theatre companies Middle Child. He provided a live electronic score for the award winning debut theatre adaption of Richard Millward’s Ten Story Love Song, which premiered at the Hull Truck Theatre and Edinburgh’s Fringe Festival.

Previous projects have seen him tour Europe playing a string of festivals and iconic music institutions including the monolithic Berghain in Berlin. He has toured with the legendary Gus Gus across Poland and Germany and worked as a Sound Designer for the Swedish synth company Elektron.

Saint Cole
Techno/Experimental/Electronica
Nic Marsden of Saint Cole grew up in West Yorkshire, England, just 2 miles away from the legendary techno event The Orbit. It’s no surprise he would eventually jump head first into the darker sounds of electronic music, influenced by producers like Underworld, Richie Hawtin, Chemical Brothers, Leftfield, Orbital, Green Velvet, Dave Clarke and also many British indie/punk bands. He has also been in several live bands as a rapper and lead vocalist, and has worked as a song writer and ghost producer for several U.K bands and award-winning national artists. His approach to electronic music is unique and fresh, even given the present-day boundless spectrum of electronic music.

He hosts a monthly techno show for the Urban Kickz Recordings (UKR) label, broadcast on Fnoob Techno Radio and released his debut album DIVERSE INTENTIONS in June of 2016 on the mighty UKR record label, which charted in the top ten at number seven in the Beatport techno release chart, and was number thirteen in the overall release chart for every genre and recently the STARTCHILD LP again under UKR.

MyOneManBand
Taking equal inspiration from the DIY culture of early warehouse parties and the panoramic scope of classic film soundtracks, MyOneManBand creates one-off electronic compositions that are created live in the moment to hang in the air over the crowd before being lost, for evermore. It’s a infinite surprise and that is the point. There maybe hard edged beats with a classical edged string or two or there may be the chinking of a 50 pence piece on a freed kitchen tap to create a sonic wave. There may be words, there could be musical fusion… This is the point.