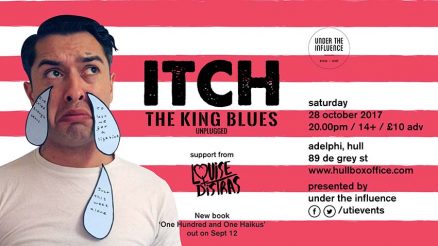 UNDER THE INFLUENCE PRESENTS

ITCH (THE KING BLUES UNPLUGGED)
PLUS SUPPORT FROM LOUISE DISTRAS

This show will be Songs Old and New), Poetry, Spoken word and social
commentary. Not to be missed.

As frontman and songwriter for the critically acclaimed The King Blues
for the past 13 years, Itch has made a name for himself as one of
Britain’s most treasured lyricists and political spoken word artists.
Through endless international tours, 5 albums plus a solo album and
featured poetry performances, Itch has gained a sizeable fan base around
the world. His poems have been commissioned by the BBC, ITV and Channel
4, he’s appeared regularly on the front covers of Kerrang, Rock Sound
and the NME and his solo work which featured collaborations with
Matisyahu, Goldfinger, Taking Back Sunday and Less Than Jake reached
platinum sales status.