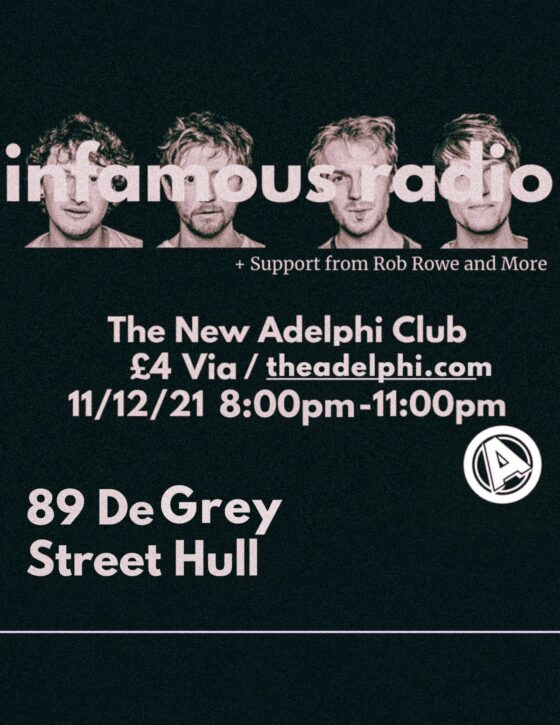 Infamous Radio are a Hull born, Rock and Roll outfit from the late 2000’s – early 2010’s. They take inspiration from a wide and diverse range of artists from The Buzzcocks to The Black Keys. Regulars at venues such as Adelphi, Linnet and Lark – Sesh, Old Picture House, Lamp, Big Coffee and Ringside the band made a name for themselves as a loud and energetic three piece and made Alan Raw’s pick of the Cottingham Springboard Fest for their floor shaking King Billy Set and appeared at the Leeds Cockpit. The band moved to London and becoming a four piece became regulars at venues such as Proud Camden, The Camden Enterprise, Bar Solo, Monto Water Rats and the Legendary Barfly before it closed. They continued to jam and write over the last few years and return to hometurf for a farewell gig.

Rob Rowe is an Actor and Musician – born and bred in Hull. Rob flirted with the Hull music scene in the late 2000’s, early 2010’s most notably with The Cardboard Cutouts – a hybrid sound of Buddy Holly and 2004 Indie. 4 chords basically! The band played Adelphi, Lamp, Linnet and Lark Sesh and Big Coffee probably too much but loved every minute – peaking in 2010 with a spot as House Band on Annie Mac’s BBC Radio 1 programme Switch.

As with all these things…it had to end – Rob left for the lights of London and drama school in September 2010. Yet to feature in anything anybody has actually seen – Rob has worked extensively across the UK as an Actor in regional theatres and the West End. It’s been a decade since Rob played Adelphi last – but couldn’t turn down the opportunity. Apparently he’s gone folk now?

The Matchbox Deriving from a song by The Kooks – The Matchbox connect from across the UK to rally in Manchester, England. The band’s flares of Rock & Indie have been picking up steam and forced excitement in pockets across the country – with appearances at the likes of ‘This Feeling’ & ‘Made In Manchester’ this summer!