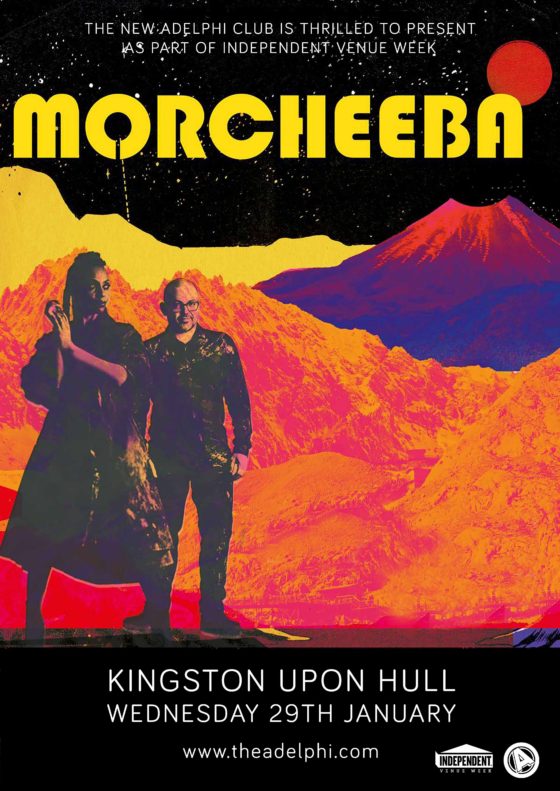 We’re thrilled to announce that MORCHEEBA will be performing at The New Adelphi Club on Wednesday 29th January 2020 as part of our Independent Venue Week celebrations.

MORCHEEBA is one of the great UK bands at the forefront of the trip-hop genre rising to prominence in the mid-nineties, touring the world and selling over 10 million albums across two decades including the hit album “Big Calm” and mainstream chart success with singles “The Sea“, “World Looking In“ and “Rome Wasn’t Built in a Day“. Skye has one of the most recognisable voices on the planet and hearing her smooth and effortless tone teamed with Ross’ psychedelic guitar is an unforgettable, spellbinding experience.

The band has just produced its ninth album and is currently touring the world. “20 years in, it’s never taken us longer to tour the world,” says singer Skye Edwards. “We’re still finding fans in places we’ve never played before, who’ve waited all this time to see us, or fans who’ve only recently discovered our music through streaming. It’s amazing.”

Morcheeba’s global success is no surprise. Being one of the first Western acts to tour China, their melting pot sound has been border-hopping ever since the London-based band emerged from the mid-’90s trip hop scene that made them household names at home. Several line-up changes later and the departure of DJ/producer Paul Godfrey in 2014 – Morcheeba have never been busier or more in tune with the times.

Blaze Away, their positivity-packed ninth album, marks both a fresh start in its organic approach and a return to the joyous genre-mashing of their early days. There was no template for its ten, extraordinary, future-facing songs, no self-imposed limits on style, no themes to be adhered to or rules in place to break.

“Touring so much and seeing what works for us on stage, all around the world, gave us the confidence to experiment,” says multi-instrumentalist Ross Godfrey, now also the duo’s producer.

The Broken Orchestra are a collective of musicians headed up by production duo Pat Dooner and Carl Conway-Davis. During 2018 the duo wrote and produced the soundtrack for BBC Radio 4 drama Bathwater and also received regular radio play on BBC 6 Music and BBC Introducing. BBC support continued into 2019 through work on Contains Strong Language Festival and appearances on the BBC Radio 3 show The Verb as they released their second album ‘Pathways’ on Vinyl, CD and Download.
Added to this The Broken Orchestra also tour as a live five piece band and have performed nationally at venues such as Band on the Wall (Manchester), HiFi Club (Leeds), Hare and Hounds (Birmingham), Hoochie Coochie (Newcastle). In late 2019 they produced a one off show called Home that was commissioned by Hull Jazz Festival and performed during their winter programme of events at Hull Truck Theatre.
To find out more about The Broken Orchestra see the links below:
http://www.thebrokenorchestra.com
http://www.facebook.com/TheBrokenOrchestra
http://www.twitter.com/brokenorchestra

Tickets are on sale now priced at £20 with no booking fee. Tickets are not for resale.
Don’t miss this chance to see a great band up close and personal at The Adelphi.