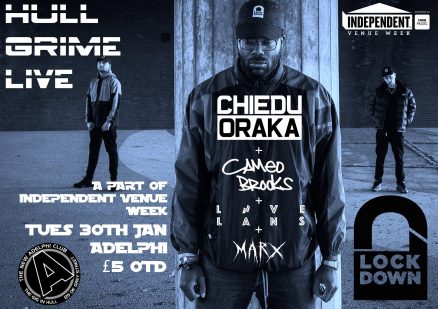 A part of Independent Venue Week –
HULL GRIME LIVE is a showcase of the best that the Grime, Rap and Hip-Hop scene in Hull has to offer!

Hull MCs are quite different from their London or even Manchester counterparts. They don’t rap about guns or clothes. Instead, in Hull accents, they spit bars about their lives in the city. –
Dave Simpson – The Guardian

TICKETS ONLY £5 ON THE DOOR.

With a Live Headline set from Chiedu Oraka and The Lockdown Crew, in the form of MC/Producer and Co-Founder of Lockdown, DeezKid. And The Third on the decks.

Championing the city’s urban scene, Hull’s Chiedu Oraka’s an artist who’s not defined by any one genre of music. Describing his music as the sound of Northern working class England, he thrives on giving the audience a different experience every time they see him.

“Grit and realism slap you in the ears when Chiedu Oraka gets the mic. This skilful rapper from Hull’s North Hull Estate, was supported by BBC Intro Humberside onto the 1Xtra playlist.” –
Alan Raw, BBC Introducing in Humberside

Here they are at Radio 1’s Big Weekend –

CAMEO BROOKS – Influenced from oldschool Hip Hop Cameo puts in his own originality and old twist into his music, taking inspiration from Hip Hop acts like Arrested Development and Lauren Hill. Intelligent wordplay and clever metaphorical use make Cameo’s music emit a great energy and show his true love for the art. Taking inspiration from whats around him, the clutter, the chaos, the confusion of a world that seems to have no hope for a millennial mind.. but somehow seeing past the materialistic and fighting for a better world.

The title of his debut single says it all.. Divin’ In is a fun debut with tongue-in-cheek digs at the world he’s about to enter and gives a taste of whats to come. A young man ‘Divin’ In’ to a vast ocean of hip-hop and rap, ready to find his place but quietly confident he already knows who he is. If this is just a taste of whats to come then we can’t wait for the three course meal.’ – Warren Records

Check out his Debut Single – Divin’ In:

“Marx’s wordsmithery is impressive, his references rich and varied, painting a vivid picture. He doesn’t rely on the overused genre staples, such as the boasts of material possession or empty success, like many modern rappers who have grown up listening to Gangsta Rap with its idle bigotry and promotion of greed. Real Grass Roots Rappers promote their humanity in its various hues, the trials and tribulations of the day to day- like scraping to make ends meet, community and survival. Intentional or not, it makes them far more endearing and far more interesting.” – Luke Goodhand, Voxx Magazine

Check out the music video for “My First Show” here: