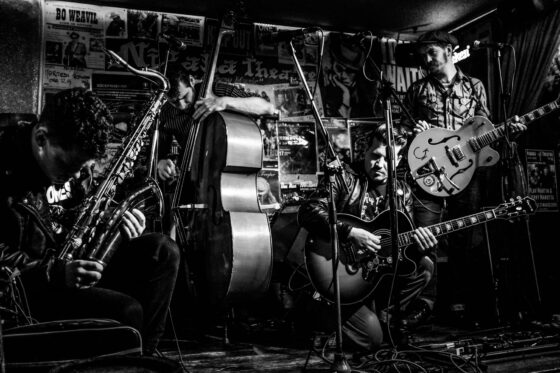 Leeds-based Howlin’ Ric & the Rocketeers play vibrant and authentic rock and roll, roving from raucous rhythm and blues right through to dreamy popcorn love songs. Wailing vocals, virtuosic sax and biting, grooving guitar will have the audience bouncing, swinging and sweating from start to finish.

After forming as a trio in 2016 their debut releases, Cannonball EP and Tears Before Bedtime EP, were championed by BBC Introducing and UK Rock and Roll Magazine. In 2018 the band expanded the line-up, adding saxophone and drums to the already rocking guitar and bass rhythm section.

Their debut album, Waiting By The Dance Floor, was released in 2019 and is a product of band leader Richard Colley and his life long love of Rock ‘n’ Roll, Rhythm & Blues and Rockabilly. Over recent years he has immersed himself in the new great roots artists such as Nick Curran, The Bellfuries, JD McPherson and the amazing bands that have been coming out of Hi-Style Records but not before refracting the sound through his record collections, drawing on classic Rock ‘n’ Roll and Rhythm & Blues.

Since the release, they have set their stall out as a hard-touring outfit, headlining shows across the UK as well as performing at a multitude of festivals including Rhythm Riot, Atomic, Underneath The Stars, SummerTyne Americana, Great British Rhythm and Blues and made lauded debuts across Europe in Belgium, Holland, Germany, Austria and Italy.

Howlin’ Ric & the Rocketeers deliver an exciting take on a great American tradition. Presenting original Rock & Roll and Rhythm & Blues with a classic and fresh sound and are back in the studio recording their next album, for release in 2022.

Ramble Gamble are an alternative-folk band from Lincolnshire, formed in early 2014.
Matt Hercock, Jonny Lavin, Sian Hart, Chris Logan and Gav Mcarthur formed the band out of a love for music, drinking and refusing to conform to the general sound of their local music scene.
They have played up and down the UK, sharing with audiences their unique style of music, and their adrenaline-fuelled stage presence. From playing in small cramped pubs, to festival stages in front of thousands of people, Ramble Gamble always put on an energetic, inventive show, filled with songs about pirates, cowboys, bar fights, love and whiskey!
Rather than your typical folk band, Ramble Gamble also explore a variety of other genres, taking what they need to make their sound and songs as original as possible, throw in a variety of stringed instruments, a large percussion setup, more or less made up of anything that isn’t a typical drum kit, and you get their alternative-folk sound.
Slim Tubby
Solo set from Hull legend who is embarking on a journey of health and happiness with a series of solo gigs. This is his 1st Adelphi show for a long while with the promise of more shows to come during 2022 and beyond.
This website uses cookies to improve user experience. Please confirm that you accept the use of cookies. More information can be found in our cookies policy. Find out more.