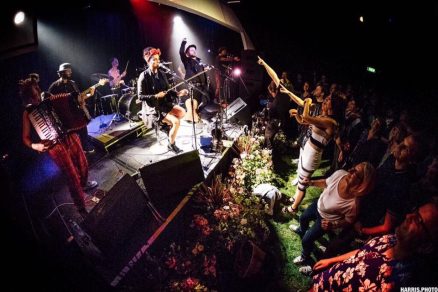 With their unique fusion of “gypsy folk rock”, Holy Moly and The Crackers hail from the North East of the UK, and have a loyal, devoted and ever-increasing fan base: “They are a bunch of wild gypsy troubadours with more than a touch of magic about them” (Diva). The band have built themselves an enviable reputation, pulling packed houses for their ferocious, visceral live shows, and now they are heading into heavier, gutsier waters with their new album Salem.

Over recent years Holy Moly & The Crackers have produced a moonshine mix of genres, creating their own unique and compelling sound, influenced by an electric and eclectic range of folk and popular music. But Salem, which they will unleash this year, is a departure. It’s folk only insofar as the songs are built around a narrative – they have a driving, urgent beat about them. The band has hardly drawn breath over the last two years – furiously touring and developing their live show, yet all the while creating new material, pushing at their sound, moving things on: The new songs are darker, starker: they have a “fiery new urgency” (Crack Magazine).

Premiered on God Is The In The TV Zine and Clash Magazine, Salem is lifting the band’s live show to another level: “We’re changing and developing all the time” say the band. ‘We describe ourselves as gypsy-folk-rock’, but that’s a very loose time. The songs are still built around narrative but now there’s a bigger beat; more compulsion, a harder drive, a darker underbelly. We’re toughening up.”

Holy Moly & The Crackers are surely one of hardest working bands on the circuit with a following that multiplies with every tour. Over the last two years they have toured the UK extensively, and made impressive debuts in France, Germany, Italy, Holland. Their festival appearances include Glastonbury, Bestival, Hop Farm, Cornbury, Secret Garden Party, Boomtown Fair, Wilderness, Larmer Tree, Kendal Calling, Underneath The Stars, Belladrum, Just So, plus many more. At Towersey Festival 2016 they were introduced to the main stage as “festival band of the year”.