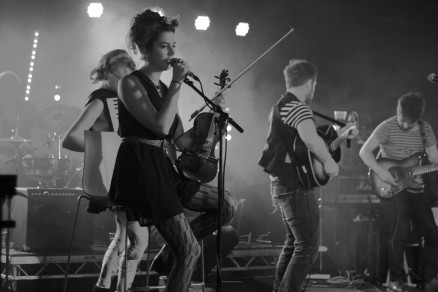 Holy Moly & The Crackers + Support
Advance tickets on sale until 4.00pm today.
Some tickets will be available on the door but be early. Doors 8.00pm.

Holy Moly & The Crackers is a seven-piece ‘Gypsy Folk Rock’ band from the UK. Founders – Conrad Bird, Ruth Patterson and ‘Squeezebox’ Rosie – lead the band with compelling charismatic style. “They are a bunch of wild gypsy troubadours with more than a touch of magic about them” Diva Publications

They released their debut album ‘First Avenue’ in October 2012 and an EP ‘Lilly’ a year later – described as “a re-imagining of three traditional folk/blues songs that evokes eras of whiskey and guns on modern punk folk steroids” Cover Lay Down. Their single ‘A Punk Called Peter’ (2015) is “a sort of New Orleans funeral march mixed with some fine and highly danceable reggae” Northern Sky. Their latest single ‘Burning Back Wheel’ was released in 2016. They are currently working on their next album with rock/pop producer Matt Terry (The Enemy, Wonderstuff, RSC etc.) – “There is a good reason as to why a lot of people are loving this band, I was drawn in the moment I heard them” M.Terry

Surely they are one of hardest working bands on the circuit with a growing and loyal fan base: Over the last two years they have toured the UK extensively, and made impressive debuts in France, Germany and Holland. Their festival appearances include Glastonbury (Avalon Main Stage), Hop Farm (Bread & Roses Main Stage), Cornbury (Main Stage), Secret Garden Party, Boomtown Fair, Wilderness, Larmer Tree, Kendal Calling, Underneath The Stars, Belladrum, Just So plus many more.

“We throw a whole load of genres into the mix. We describe ourselves as “gypsy folk rock”, but that’s a very loose term. And we’re changing and developing all the time. There’s a big beat; we like to make people dance. But, at the same time, the songs are built around narrative – I guess that’s why we’d class ourselves as a folk band, we like to tell stories” Holy Moly & The Crackers