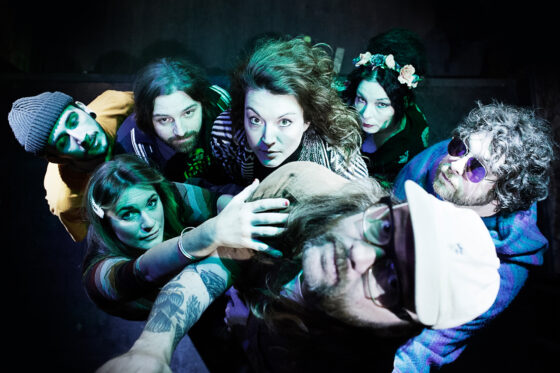 Heavy Salad formed in Manchester in Autumn 2018 by Lee Mann (formerly of The Moonlandingz) on bass and vocals, Rob Glennie on guitar and Allan Hutchison on drums. The group, charged up on a myriad of musical influences,  create a cosmic slop of melodic 90s tinged rock and psychedelic 60s inspired pop infused with the bands eclectic love of surf rock, electronic pop, funk, jazz, gospel and folk.The band quickly expanded into a seven piece with the addition of ‘The Priestesses’ whose soaring vocals bring a soulful, cosmic vibe to the Heavy Salad sound and Oscar Remers on guitar, vocals and synths.
Already receiving radio play on 6Music, Radio 1 and Radio X from the likes of Guy Garvey (Elbow), Jack Saunders and Steve Lamacq, the band released their debut album Cult Casual, recorded with producers Christophe Bride in Salford (ACR) and Ross Orton in Sheffield (Arctic Monkeys/Working Men’s Club) in September 2020.
Currently on tour with Manchester’s PINS, Heavy Salad are putting the finishing touches to their second LP recorded in Manchester with Christophe Bride at Oxygene Studio and in West London with Stephen Street (Blur / The Smiths) at Damon Albarn’s Studio13. The band will release new single ‘Psilocyberman’ in spring 2022. Heavy Salad works in the space between perceived reality and the abyss of your mind…
They find a way to add nuance to celestial conversation with vibration-raising mantras nestled into hooky psych-pop hits in a way that no one else could.”

LOUDER THAN WAR
Album Review – ⅘ – “Heavy Salad arrive on the scene with a glorious mix of all things pysch, gospel, soul and all things funky with their spot on debut album.” – https://louderthanwar.com/heavy-salad-cult-casual-album-review/
THE BIG ISSUE MAGAZINE
Album Review – 3/5 – “Heavy Salad draw upon a colourful palette of influences…bewitching” – 28 SEPTGIGSLUTZ
Review – “Chocked full of surf-rock beats and overdriven guitar, ‘Cult Casual’ sucks you into its psychedelic vortex of wonderfully off-kilter pop music.” – http://www.gigslutz.co.uk/review-heavy-salad-cult-casual/
PETERBOROUGH TELEGRAPH
Review – 8/10 – “It’s OK To Bleed Is a Highlight” – 2 OCTOBER, SEE CLIPPING
TURN UP THE VOLUME

Album of the Day – https://turnupthevolume.blog/2020/09/28/dont-worry-be-happy-hallucinate-on-the-debut-album-cult-casual-by-manchester-collective-heavy-salad/

THE LINE OF BEST FIT

THE MORNING STAR
Album Review – 3/5 – “AN EXPERIMENTAL psychedelic-pop concept album taking the listener on a backwards tour through existence, Cult Casual is an interesting debut from Heavy Salad.It opens like some 1950s surf-rock doo-wop throwback with the track Death, which would not be out of place on a Twin Peaks soundtrack, before it turns into a psych-rock wig-out” – https://morningstaronline.co.uk/article/c/album-reviews-19
ORIGINAL ROCK
Album Review – “Rock, post-punk, and psychedelic-music lovers will enjoy Heavy Salad” – https://originalrock.net/2020/09/19/heavy-salad-cult-casual-album-release-25-september-2020/
THE SOUNDBOARD REVIEWS
Album Review – 7/10 – “Heavy Salad find plenty of fertile ground in slotting their individual elements together and coming up with a lot to like from it. It’s definitely brighter and more open to embracing colour” – https://thesoundboardreviews.com/2020/09/23/review-round-up-public-enemy-jamie-lenman-into-it-over-it/
WALL OF SOUND
Album Review – “If you like something well out of the ordinary and have a sense of musical humour, then this may well be for you. It is a real antidote to samey, safe pop, but quite a strong antidote at that.” – https://wallofsound.org.uk/album-reviews-part-one#d4674b9f-41e0-42c8-b53d-031012cc356f
SILENT-K

Frontman Chris Taylor – aka Pineapple King – has been at the forefront of the stage and line-ups since SILENT-K’s inception, previously touring on guitar for both Fat White Family and Dave McCabe & the Ramifications. Alongside Taylor, SILENT-K was co-founded with Dave McCabe from critically acclaimed Liverpool band The Zutons.

The outfit’s debut album will be released in 2022 and is being mixed by legendary Sheffield producer Ross Orton, renowned for his production work with Arctic Monkeys, Jarvis Cocker, Working Men’s Club and The Fall.

SILENT-K tap into the psychedelic spirit that travels through the Mersey.

“I had not seen the basement as busy as it was for Silent K since The Parrots at Festevol 2017. The atmosphere down there was electric.”

“Great beats, short and infectious riffs, the whole package of their sound is really exciting – and by the time they’re on their second song, Phase One is rammed.”

“SILENT-K were a blast of fresh air featuring previous member of the Fat White Family, Chris Taylor, a guy in a bee-keepers suit and a brief one song shrouded appearance from The Zutons’ Dave McCabe among others.” https://www.getintothis.co.uk/2019/11/fat-white-family-working-mens-club- silent-k-invisible-wind-factory-liverpool/

“Chris Taylor sounding like Wayne Kramer of the MC5 (with falsetto vocals and hot guitar licks).”

“Northern rock and roll from the twilight zone.”

“Front and centre, Taylor’s powerful vocals project to the back wallof EBGBs.”

Gigslutz Track of the Day:

Hull based Indie-Rock with snarly guitars, groovey trainers, anthemic indie choruses and an army of followers. New to the Hull-scene but quickly making waves. Always great to see a young band coming through the ranks. One to watch.