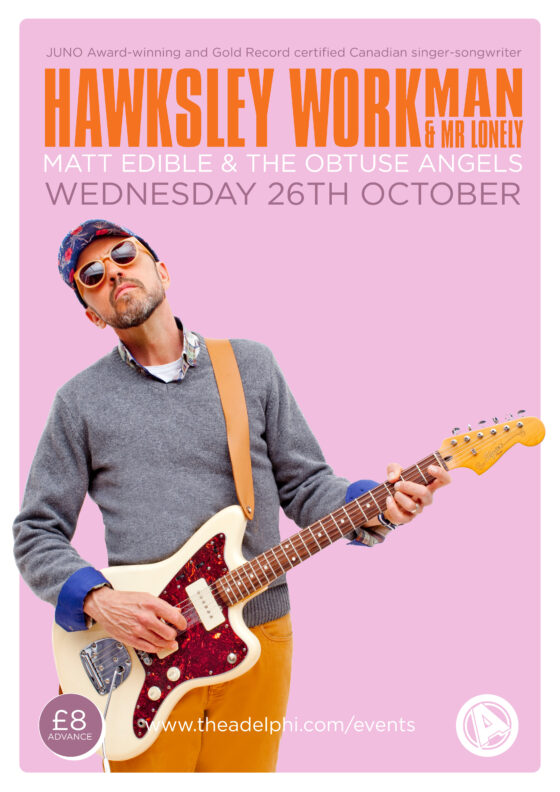 We are excited to announce the return of Hawksley Workman to The Adelphi after a 20 year wait.

Hawksley Workman is a JUNO Award-winning and Gold Record certified singer-songwriter and multi-instrumentalist. Since his ground-breaking self-produced indie debut For Him and The Girls(1999) through to chart-topping singles of 2020, Hawksley has careened between major label international smash hits to Canadiana soaked indie releases. Boasting a catalogue of 17 solo records, Hawksley’s genre defying style strings together folk, chart pop and irrepressible cabaret. His show-stopping vocalson songs about weather, love, heartbreakand tales of end-times have garneredhim a league of devoted fans.Performing over a thousand shows worldwide, Hawksley has headlined prestigious venues like Massey Hall and The Olympia in Paris. For a uniquely Canadian artist Hawksley has built loyal fan bases in the UK, France, Norway and Australia launching many successful tours, demystifying and delighting fans while drawing on an enviable catalogue of mischievous favourites, glammy stompers and heartfelt hymns to small town Canada.

This will be a special evening. Highly recommended.
Adv Tickets £8 (below). On sale from Tuesday 12th April…