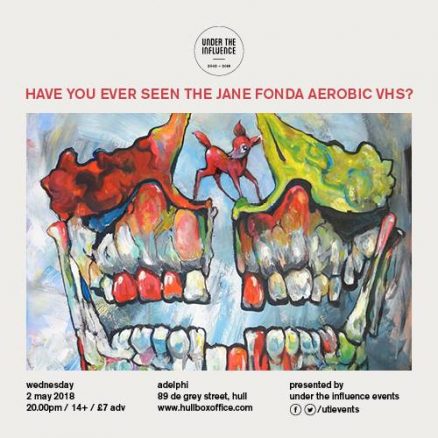 Have You Ever Seen the Jane Fonda Aerobic Vhs?

Under the Influence presents
Have You Ever Seen the Jane Fonda Aerobic Vhs?
with support from The Holy Orders + Apparition

Have You Ever Seen The Jane Fonda Aerobic VHS? is a unique band in the Finnish rock scene not only because of its long name, but also because the band doesn’t have a guitar player. Instead melodies and distorted sound walls are created by good old Casio and Eco-organs.

Packed with 60’s girl group/soul-melodies, bubble gum punk riffs and pounding drums, which will make your
eardrums bleed, this newcomer is truly something to get to know.

HYESTJFAVHS? gets it’s influences from a rather wide range of genres: all the way from garage rock to doo-wop, rock’n’roll to
80’s dream pop and 60’s soul and girl groups.

The Holy Orders were first told that their amps were too loud in 2006.

Since then, the four-piece from Hull have divided the opinions of many sound engineers. The combination of strong songs, melodies, massive amounts of energy and huge dynamics has gained them a reputation as a ferocious live act.

Their debut album ‘For the Ears of Dogs to Come’ was released in the summer of 2013 and has been gathering acclaim ever since.

The Holy Orders signed to The Adult Teeth Recording Company in 2016 and released their latest single “Dedicated Follower of Fashioning Misery” in 2017.

Tom Robinson has championed the band saying:
“Just when you’ve had it with Strokes/Interpol/Editors soundalikes along come The Holy Orders and restore your faith in indie guitar music”
He invited them onto The Tom Robinson Show on BBC 6music to play a session and, as well as playing them on his listener requested Now Playing show, they were his choice of new band when he selected his pick of songs on BBC 6music’s The First Time.

The Holy Orders also featured in BBC Introducing’s Ones to Watch list of 2013.

The Holy Orders continue to be loud.

“The Holy Orders are here to rescue rock from the fakes, the phonies and the frauds.” The Devil has the Best Tuna

“For the Ears of Dogs to Come is everything that makes them a fantastic live act captured on tape, a gutsy, guitar-driven affair with tangible emotive qualities.” 9/10 Whisperin’ & Hollerin’

Since starting around November 2016 Apparition has gone from strength to strength.

They are a grunge outfit which travels into some psychedelia and raw punk. Originally a two-piece they did add a third member Louis Turner who plays synth to fill out their sound with surreal hooks. Now a three piece of guitar, synth, vocals and drums they have a sound which is powerful and one which can captivate an audiences attention in seconds.

Since starting they have had the pleasure of playing with bands such as IDLES, MOUSES, La Bête Blooms and False Advertising!