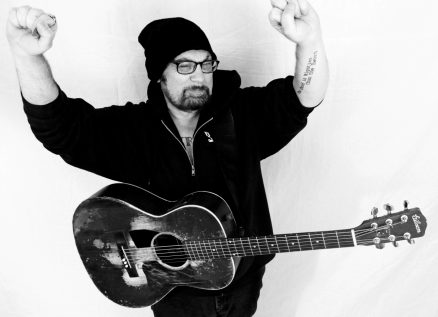 A big celebration night for The Adelphi.
Adelphi friends and family get your tickets for this special event.
We have some great news to share on the night.

Hamell has released numerous LPs on various labels including his own DIY label and frequent touring mate Ani Difranco’s Righteous Babe Records, and they’re all great. And while songs like “I Hate Your Kid” and the homicidal “Tough Love” may lead you to think he’s a cynic, nobody could be less so, as songs like the hilarious but ultimately moving “First Date”—and “Blessed,” “Whores,” and “Mom’s Hot” off his forthcoming LP The Happiest Man in the World on New West Records prove. Ed Hamell has a heart of gold, and I can honestly say he was without a doubt the kindest, funniest, and most knowledgeable musician I’ve ever interviewed. Michael H Little

+ Martha Hill’s Young Team
Busking since she left home aged 17, Martha Hill will be most known locally as multi-instrumentalist and key vocalist in carnival-rock troupe Holy Moly & The Crackers. She was joined by Ceitidh Mac on Cello in December 2016 and Martha Hill Young Team became a reality. The line-up was completed when multi-instrumentalist Sharon arrived in January 2017. Martha Hill Young Team create true journey music. Their roots firmly in soulful folk and seductive jazz, married to the eccentricities of modern electronic. Far from traditional, they fuse timelessness with alluring arrangements that have hooked and held peoples’ ears both in England and across Europe.

+ Beings
The Universe begins. Thirteen point seven billion years later, previously bright stars have used the majority of their fuel and become relatively dim, brown dwarves. Viewing these brown dwarves with an inexpensive telescope from his top floor window on a regular suburban street is a man. He remembers a conversation he had with a friend, via text, about a band called Beings. His friend had heard that they were playing some songs and also previewing their excellent new album at The People’s Republic in Hull on the 8th of February. Thoughts of brown dwarves and of the larger Universe slipped from his mind as he replied with an emoji thumbs-up and a lower case x.
Beings are a band made from former members of Hull’s very own Salako.