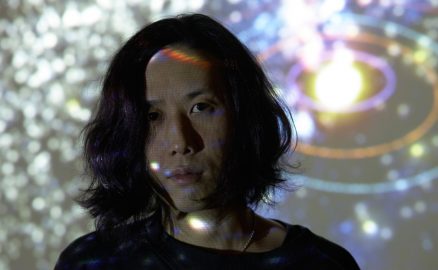 Under The Influence presents
GRIMM GRIMM & Visuals by Daisy Dickinson

Grimm Grimm is the experimental folk/pop project of London-based singer-song writer Koichi Yamanoha.
London-based singer-songwriter experimentalist Koichi Yamanoha has been operating under the guise of Grimm Grimm since 2013. The project is an outlet for his fragile, otherworldly forays into baroque folk, futurist lyricism and electroacoustic oddities. Born in Tokyo, Yamanoha’s first solo record, ‘Kazega Fuitara Sayonara’, was released in late 2014 via Charlotte Courbe and Kevin Shields’ Pickpocket Records.

This was followed up with his debut album, Hazy Eyes Maybe, on ATP Recordings in 2015.

His sophomore album, Cliffhanger, has been in the process of development since, capturing the intimate confessions, which have made Yamanoha’s live performances so tender and intense.

There are opaque, semi-conscious pop reductions like ‘Afraid’ or ‘Take Me Down to Coney Island’, while other tracks state their intentions with open vulnerability.

‘Ballad of a Cell Membrane’ is comparable to the tenderness and fragility of Syd Barrett’s later recordings, while ‘Orange Coloured Everywhere’ and ‘Diagonal Green’ take their queues from early Radiophonic Workshop experiments, detuned organs and gauzy field recordings awash.

Indeed, at its most abstract Cliffhanger is like the incidental music of a 1960’s John Frankenheimer thriller, yet there are also touching and expansive minimal acoustic ballads included here. Still Smiling’, ‘Final World War’ and Yamanoha’s cover of The Misfit’s ‘Hybrid Movement’ particular successes on an LP which is both nostalgic and challenging in equal measure.

She is one half of audio/visual collaboration Adrena Adrena with ex- Boredom’s drummer E-da Kazuhisa and is currently working as a visual addition to 90s post-rock group Seefeel.

Dickinson’s visuals have been described as ‘magmatic and sulphurous, cosmological and transcendental, drawing attention to the wonder of the earth and our sensuality on it’.
For Grimm Grimm’s album launch tour, they will be collaborating on a special AV set with new live mixed visual material created specifically for the tour.

Movements Of a Nebulous Dawn @ The ICA, London