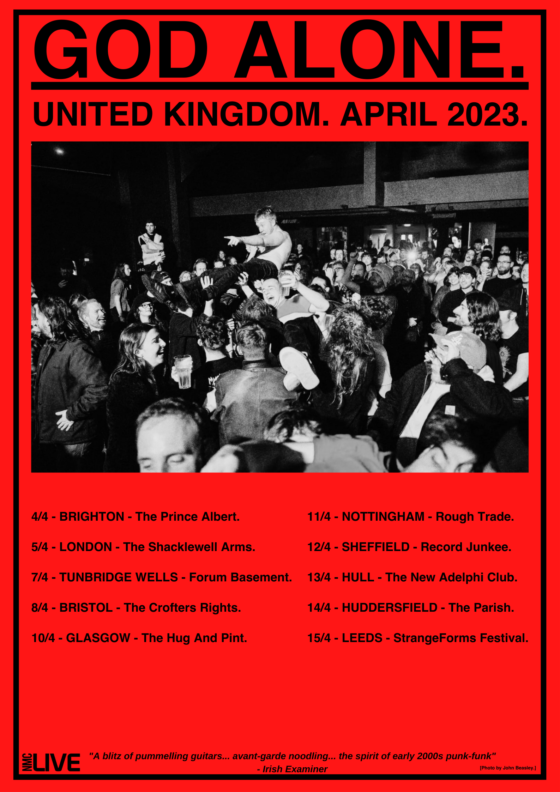 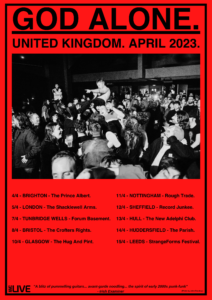 Cork, Ireland’s own God Alone has existed for some time as a simple-yet-effective post-metal band, putting out a solid release in 2018’s Bent Shoulders, but nowhere near as distinctive and singular as ETC is.  To talk about their sonic evolution, we have to go all the way back to the origin story of the quintet, at the MTU School of Music in Cork, where the members all met and where they attend their studies, and also where ETC was recorded.  In the intervening time since Bent Shoulders, the band members have taken in influences both within and without the general category of music, as well as new a new ethos on writing.  Storming the Irish music scene has helped them realize how important the live version of their music is, so ETC was written with a tighter focus on recreating the whole song live.  Naturally, that means stripping back some of the huge washes of sound that categorizes post-metal, and…boy do they.  If the album art doesn’t clue you in, ETC is a study in minimalism as well as experimentation.  Clean guitars dominate, synths are often reduced to simple one-note stabs, and drummer Jack O’Hanlon plays as much on the rims as he does on the actual head of the instrument.  The band states that the Talking Heads are actually one of the biggest influences on this record, along with Dadaist poetry, dance music, math rock and post-punk.  Lyrically, the album focuses very heavily on the aforementioned Dadaist and existentialist themes of nothingness, meaningless, endless repetition and absurdity.  If all of this feels very intellectual and hoity-toity, it is.  We love dumb-guy music here, but this is certainly not it.  It is, however, like nothing else you could possibly listen to.