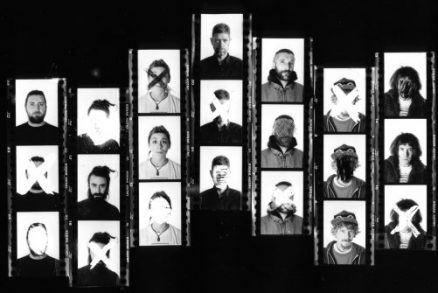 Having first collided on record 3 years ago via Rocket Recordings ‘Drop Out With…’ LP, two of the most colossal cosmic manglers on the planet, New York’s White Hills and Manchester’s GNOD, head to Hull for a blistering night of rabid fuzz and reality bending repetition.

White Hills are proponents of psychedelia as transformation. Hard-line, gritty, and intellectually engaged, the music made by Dave W. and Ego Sensation is risky and cutting edge, rooted in dystopian futurism and hyper-conscious of society’s constant desire for a new and better drug.

Formed in New York in 2005, they are known for being one of the most prolific bands of their generation, recording over 40 separate releases including 7 full-length studio albums. Having continually refined their sound, pushing the boundaries of psychedelic music, their latest album ‘Stop Mute Defeat’, released on Chicago’s Thrill Jockey Records, is a brazen, industrially-charged nod to greats such as Throbbing Gristle and Cabaret Voltaire. Pulsating unlike anything they’ve released before.

Hard-line, gritty, and intellectually engaged, ‘Stop Mute Defeat’ is a New York record through and through. With this in mind, White Hills drafted Martin Bisi (Sonic Youth, Brian Eno, Afrika Bambaataa) to mix. A native New Yorker who made his name in the city’s early hip-hop and no-wave scenes, Bisi was attracted to White Hills’ new material for its distinct early-80s Mudd Club feel. A dance hall, drug den, and bar, the Mudd Club was one of New York’s legendary haunts in the late 1970’s. As a centre of a distinct art scene the club served as a major influence for White Hills and Stop Mute Defeat’s sound.

The band’s relentless touring of both the US and Europe has gained them a following worldwide, commanding stages both gargantuan and intimate.

A Mancunian psychedelia collective drawing on influences as disparate as Afro-beat, krautrock, drone, noise and jazz, GNOD’s musical trajectory has been one of constant fluctuation borne out of an incessant need to discover new sonic worlds. Beginning life as a shamanic drone ensemble, at times fitting up to 15 members on stage, these early rituals informed the core ideals that have come to define the group in their years of activity; community and trance-inducing repetition. GNOD’s music rotates and expands around a constantly changing line-up, summoning the freak ‘n’ roll of Ash Ra Tempel, the motorik beat of Neu! and the groove of early Can.

Throughout a discography that has amassed dozens of CD-R’s, cassettes and vinyls for labels like Rocket Recordings, Trensmat, Krokodilo (Blackest Ever Black) and their own Tesla Tapes imprint, a restless yet organic need to mutate their music into new realms has had critics clawing for comparative touch stones. The group has had an ever-shifting lineup of multi-instrumentalists and vocalists, but some of the group’s key members have included Paddy Shine, Chris Haslam, Neil Francis, and Marlene Ribeiro. Along with their roster, Gnod’s music has constantly evolved and morphed, ranging from hallucinatory Krautrock-influenced folk to dubby, acid-drenched post-punk. Their music is far more aggressive and darker than most bands associated with the modern psychedelic rock scene, having as much in common with Public Image Ltd. or Swans as with Hawkwind or Guru Guru.

Gnod have received acclaim for their immersive performances and installations that involve audience participation, becoming one of the most celebrated live bands in the UK. Offering a gateway to an aural black hole and along with firm guiding hand, the opportunity to dive head and body first into a powerfully new psychedelic maelstrom full of possibilities.