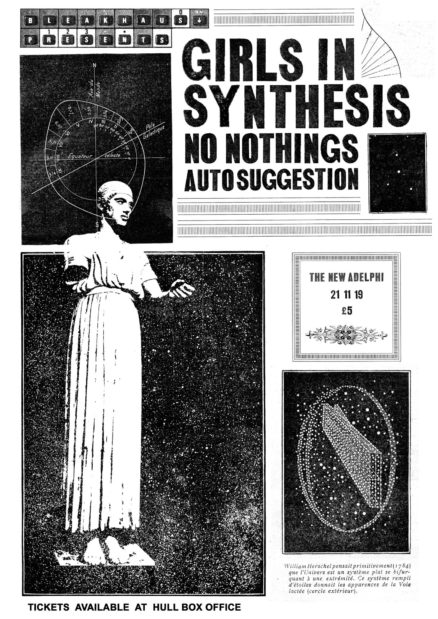 Girls In Synthesis + No Nothings + Autosuggestion

Girls In Synthesis have quickly forged a fearsome reputation as one of the most exciting and volatile live acts in London. In equal parts frantic, considered, ear-splitting and melodic, the group take their cues from the early DIY punk and post-punk pioneers to keep everything in-house; artwork, videos, performances and recordings are created entirely by the group and their handful of trusted collaborators, with their 3 hand-packaged vinyl E.P releases selling out in days on pre-orders.

Experimentation sees them transgress the punk bracket into something more original and unique while stage shows present a complete and controlled spectacle, with the group moving from playing on stage to dragging equipment into the audience, desperately trying to remove the group/audience barrier. Their explosive shows have seen them hand picked for support slots with bands as disparate as Bad Breeding, Slaves, Pigs Pigs Pigs Pigs Pigs Pigs Pigs, Wolf Alice, Warmduscher and Damo Suzuki.

Recent EP compilation ‘Pre/Post: A Collection 2016-2018’ saw glowing reviews from outlets such as Louder Than War, Echoes and Dust and Ox Magazine and, after selling out its initial run, is planned for re-issue in September 2019. With new material scheduled for release in Fall/Winter 2019, the band are spending the summer finishing off their debut album proper, pencilled in for an early 2020 release.