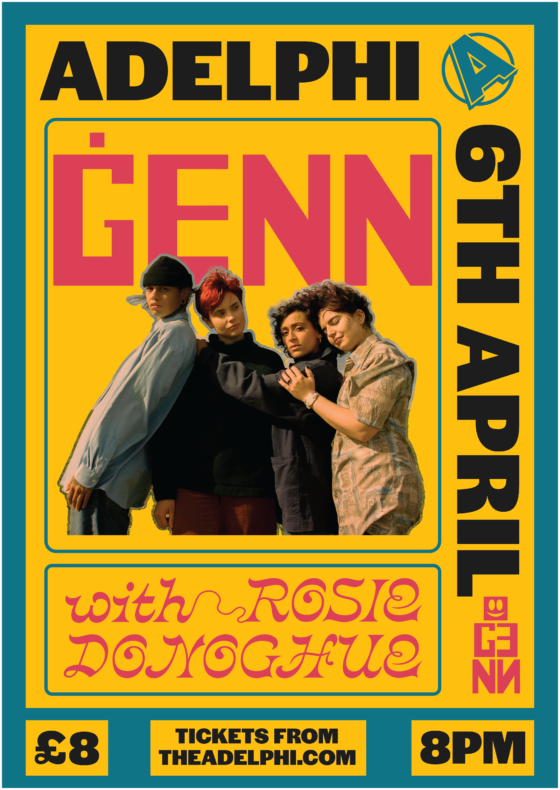 As befitting a band who take their name from the Maltese word for frenzy, ĠENN thrive amongst chaos. “Craziness follows us,” laughs lead singer Leona Farrugia, alluding to the quartet’s colourful history, which has so far featured robbery, legal disputes, long-distance collaborations, and three members of the band relocating to Brighton from Malta. Guitarist Janelle Borg concurs. “[ĠENN] could have been a support group, but we decided to make music instead,” she deadpans.

Sisterhood is an apt description for the creative dynamic within ĠENN: theirs is an unconditional bond, based on mutual affection and instinctive trust. Songs are born out of group jams, though the pandemic meant they had to adapt their process slightly to work at a distance. The songwriting on Liminal is the product of these remote sessions, with songs finalised post-lockdown at Brighton’s Small Pond Studios with producer Sam Coveney.

Key reference points for the record included Baxter Drury, Metronomy, LCD Soundsystem and Captain Beefheart, as well as the band’s most enduring inspirations Warpaint. Listen closely, and you can practically hear the band shrugging off their Riot Grrrl reputation in real time, as they move in a more experimental and neo-psychedelic direction.

Rosie Donoghue – Singer-songwriter based in North Yorkshire with influences of Angel Olsen, Mazzy Star and The Sundays. Bringing warmth into the room with dreamy folk and a unique, mellow playing style.