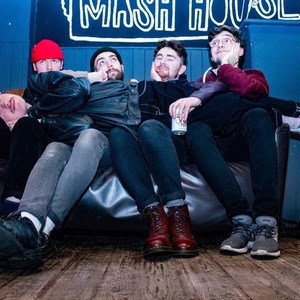 Gallus are a Glasgow based 5 piece indie-punk band with a reputation for relentlessly energetic and entertaining live shows, rapidly building a keen and loyal fan base in their homeland. Formed in early 2017, they released their debut single ‘Nice’ in March 2018 to much acclaim, and followed this up by releasing singles ‘Split’ and ‘Looking Like a Mess’ over the following 12 months. Through 2019 the band went from strength to strength, starting the year with a sold out headline show at Stereo, and following this up with two further single releases, plus a variety of raucous sets including two sold out Sneaky Pete’s shows in Edinburgh, filling out BAAD at Tenement Trail, and selling out their headline King Tut’s Summer Nights show on the festival’s closing weekend. Gallus topped off 2019 as main supports at peers’ The Dunts sold out Garage show.