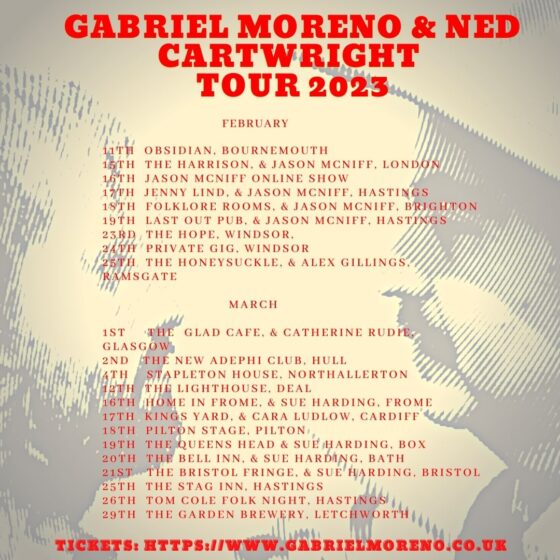 GABRIEL MORENO is a Gibraltarian poet and singer songwriter. After periods spent living in Barcelona, New York and across South America, he currently resides in London. He has been likened to poetical singers such as Nick Cave, Bill Callahan and Leonard Cohen, and has released four albums to date, including the most recent, The Year of the Rat. Released in February of this year, it has received rave reviews and airplay on BBC Radio 6 Music, and Gabriel has since been busy touring it across the country with pianist Ned Cartwirght (A virtuoso musician from the London Alternative Folk and Americana scene known for his unique and compelling piano magic.)

“An offshoot of Leonard Cohen and Neil Diamond. I love it!”
– Cerys Mathews, BBC 6 Music

“ A seductive, acoustic, outpouring of hope in a dark place, Gabriel Moreno looks to the UK’s future with a humble, sanguine spark of light” – Mitch Mosk, Atwood Magazine, New York.

“What sets Gabriel Moreno apart from his contemporaries, however, is his ever-intriguing usage of the English language to address socio-political issues.” (Loz Etheridge, God Is In The TV)

“It is the tonal breath of Scott Walker, the application of Leonard Cohen, and the beauty, even undercover mischief in the form of sexuality that was given credence by the subtly of the likes of Patti Smith, that makes Gabriel Moreno stand out in a field of observational greats.” (Ian D.Hall, Liverpool Sound and Vision)

Former Salako man with new album out…’On The Ballast Miles’…already getting 4/5 star reviews from Shindig Magazine and airplay.
Superb Finger-picking and voice in the tradition of Bert Jansch and Michael Chapman.