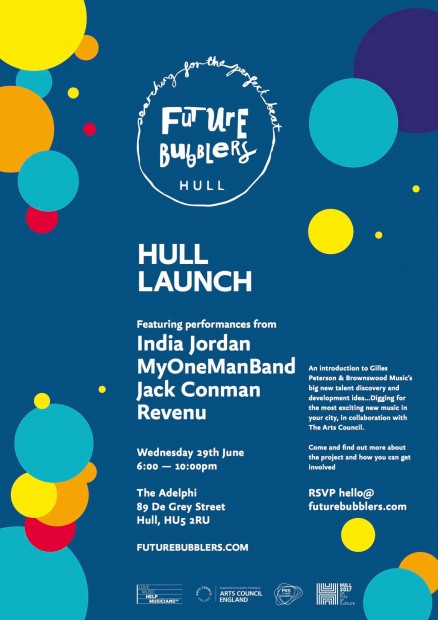 Future Bubblers is a brand new expansion of the Gilles Peterson and Brownswood Music ethos, with a real focus on making in-roads into new areas, geographically and musically across England.
May 2016 saw the launch of Year 2 of the project, and the announcement of Sheffield and Hull as the focus cities for the second wave.

The music policy at Brownswood Recordings is ‘outside the box’ – it crosses genres, continents and eras of influence and Future Bubblers” waves the same flag. Future Bubblers is about digging for the most exciting and innovative music creatives in each of the “Future Bubblers” cities. In order to help local music heads, musicians, and people generally interested in supporting music locally in the two focus cities, understand the true intention and vibe of “Future Bubblers”, we are hosting a launch event in each city. We want to introduce the initiative, explain the project’s intentions and provide an important audio reference via the specially curated live performances and DJ sets at The New Adelphi Club.

On the night will be

If you’re want to come down, it’s totally free! Just RSVP to hello@futurebubblers.com
Hope to see you there!

India attended the University of Hull and was involved with the DJ Society (Crystal Clear) and went on to work full time as the Union’s Entertainments Coordinator, creating and running the bass music night Bounce, hosting acts such Chase and Status, Ms Dynamite & Zed Bias. She moved to London in 2014, and now hosts a monthly show on Radar Radio called The Sound Of… The show focuses on themes and concepts and features lots of experimental, ambient & soundscape music. Recent guests include Murlo, Deadboy, Finn & Tom Lea. India also runs a monthly ambient and new age night at Rye Wax, Peckham called New Atlantis.

Already a year 1 Future Bubbler on his mentoring journey, Revenu is all about sounds and musical ideas that wouldn’t normally be put together, soulful, imperfect, outside the box music. His DJ sets promise electronic music to get lost in … the dusty gems you missed or forgot about, the off-kilter imperfect selections that just feel perfect for the dance floor. Artists from each city will offer an important audio reference as to what the Future Bubblers sound is. Discovering and promoting the hidden musical treasures buried deep in these cities and putting together positive music experiences that set vibrations for a scene that encourages music to thrive in the cities that first inspired it. “Future Bubblers” is a unique support system that hasn’t previously existed for the ‘outside the box’ artist. It is about building a long-term viability for music makers across the country. It is a country-wide movement of like-minds and vibes.

What Does A Future Bubbler Sound Like?
Future Bubblers is all about things outside of the box – musically. We have created this little audio reference to help give you an idea of what “outside the box” sounds like….

Searching for the perfect beat.