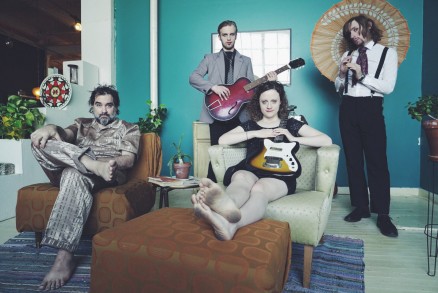 Frogbelly And Symphony + Phia + The Schoolgirls

Frogbelly and Symphony is an international quartet with band members residing in Sheffield UK and Brooklyn NY, and definitely one of the more bizzare bands to have graced the Adelphi stage in recent years. Their jaw-dropping album Bright Blue Ow Sleep is like a journey through the landscape of music, taking in everything from prog-rock to folk, art-rock to shoegaze, all underpinned by Ray Rizzo’s wild, jazzy drumming. Each track is quite distinct in style from the one before and yet they have forged these different genres into a whole that is coherent, and uniquely ‘Frogbelly and Symphony’.
Liz and Tom Hanley, Ben Trott and Ray Rizzo appropriate, adapt and recreate music using aspects of their individual backgrounds and repertoires. The heritage of Rock and Roll, the folk traditions of Ireland, Britain and America as well as literature and poetry have all left their imprint.

As a live act, these four musicians are simply outstanding and well worth a couple of hours of your time.

::::PHIA::::
“A live-looping frenzy of percussive hands, vocal beauty and…the African kalimba” (Artrocker, UK), Phia’s music is abundant with luscious layers of harmonies, rambunctious vocal percussion and vivid pop sensibilities. The Australian’s debut album ‘The Ocean of Everything’ (out Aug 26) is an album of breathtaking beauty and joy, capturing Phia’s fascination and curiosity in the world around her and inside of her, with the pure sound of her kalimba enhanced by electric guitar lines, deep synth bass and beats. Don’t miss an incomparable and exciting new talent on the rise. https://phia.bandcamp.com/

Frogbelly and Symphony are one of those bonkers bands that come along from time to time with no idea of genres or niche marketing, and play whatever they want.
On this album, there’s the sound of Libertines, a hymn, Swedish indie pop band The Concretes, a Slash-style guitar solo, funk, soul and folk, and more…
They reminded us of Do Me Bad Things, whose inspired 2005 debut Yes! was nearly as cross-genred. (Try Sprezzatura, play loud). – https://chronreviewcorner.wordpress.com/

I like to envision music as a painting. Heavy chords are oil paints and strings are small little lines. Vocals add color. The solos add passion to the piece.
To consider this record as a painting….well, it would be more of a drawing done by an inmate in a mental institution.
Inside the asylum, a single sheet of paper has been lushly drawn to create vast shapes and hues, but those pictures have naught to do with each other.
If I were to simply describe the music to the reader, I feel that they would all think me insane or a liar as well…
If you’ve said that music is too boring, derivative, or anything along those lines, here you go. This album is 100% unique to my ears. – http://glaciallymusical.blogspot.co.uk/

If only one word could be used to describe the newest Frogbelly and Symphony release “Blue Bright Ow Sleep,” it would be “trippy.”
The sound of “Blue Bright Ow Sleep” is an interesting fusion of ‘70s psychedelic rock and modern-day indie rock. Listeners may feel as if they’ve been given hallucinogens after listening to the progressive folk rock album, in a good way.
Every song is completely different from the last and yet each flows flawlessly into the next…
The psychological journey taken on this captivating album is sure to win the hearts of psychedelic lovers everywhere. – http://www.dailylobo.com/