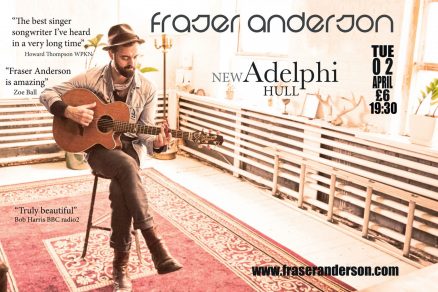 Hailed by presenter Zoe Ball as “an amazing singer-songwriter”, and “one to keep an eye on” by Rolling Stone Magazine.

If you haven’t heard Fraser’s music yet, you are in for a treat. Words fail to prepare you for his voice, described by BBC Radio 2’s Bob Harris as “truly beautiful”.

The intimate, painted narratives of his lyrics, fresh instrumental arrangements and the unforgettable beauty of his voice continues to leave listeners spellbound.

Audiences have described his live performances as both deeply moving and uplifting, and for some “the best gig” they have ever been to.

Fraser is a sophisticated artist whose musical tales of human vulnerability connect so deeply that they are described by many as personalised soundtracks mirroring their own lives – taking folk to a level that is cinematic in reach and vision. Anderson launched his latest and most experimental album to date, ‘Under The Cover of Lightness’, in April 2016, which has met with critical acclaim. Described as a “masterpiece” by MSN and voted album of the week by BBC Radio Ulster, this latest offering presents the most powerful songs he’d written to date.

Already well known across pockets of Europe, Anderson is a hidden gem now being discovered across anglophone countries like his native UK.

With a strong BBC Radio 2 following and repeat requests to perform across the UK, his fanbase is assuredly growing and sees him cross the Atlantic to North America regularly.

The fifth studio album ‘SANKALPA’ is underway, the release is planned for late Summer 2019.

Freshly recruited by Glasgow based label ’23rd Precinct/Notting Hill Publishing London’ as one of their new writers, the year ahead has all the ingredients to see Andersons music explode. As Rolling Stone Magazine said, “One to keep an eye on”. We at FA HQ couldn’t agree more. Fraser’s love of music, poetry and art began as a teenager when he witnessed the tragic death of a young man he had met just one night before. The engaged pair spoke for hours about the profundities of life and death.

Fraser has yet to find an explanation as to why this twenty-one year old man looked him in the eye and asked, “Have you ever seen a dead body before?”

The following morning Fraser was witness to a tragic accident in the mountains of the Scottish highlands in which the young man sadly died.

At a loss as to how to process the extremity of the experience, he took to writing songs.

His musical talent, stage presence and confidence as a performer were prolific from the beginning. His musical influences were broad, experimenting early as a teenage jazz fusion rapper/vocalist, drummer and pianist.

Soon after graduating music college Fraser was spotted by venerable Scottish Folk institution Dougie McLean, who invited him to join his band and branch into the folk world; he took up the challenge bought his first guitar and hasn’t looked back.

He recorded his first album, ‘and the girl with the strawberry…’ in his friend Adam Bulley’s bedroom, which his local newspaper the Perthshire Advertiser proclaimed was “a masterpiece of a debut”.

Fraser then moved to rural France, where he lived and raised his family. His isolated expat existence became an unexpected launchpad for his career. In between physically demanding labouring jobs on building sites, he penned songs and performed at local village concerts to a community that adored him and his music.

Unbeknownst to Fraser, this support would soon propel him to launch his third, studio album, and begin touring the European continent.

His loving and loyal international fanbase was confirmed by two successful crowdfunding campaigns that supported his third album, ‘Little Glass Box’, and the latest album, ‘Under the Cover of Lightness’.

Fraser returned to the UK in 2013, making the musically diverse and vibrant city of Bristol his home.

Tickets:
£6 General Admission Ticket only
£10 Ticket & Digital Download
£15 Ticket & Signed CD
£25 Ticket & Signed Vinyl
(The digital download, signed CD and signed vinyl will be issued to ticket holders on the night of the show at the venue)