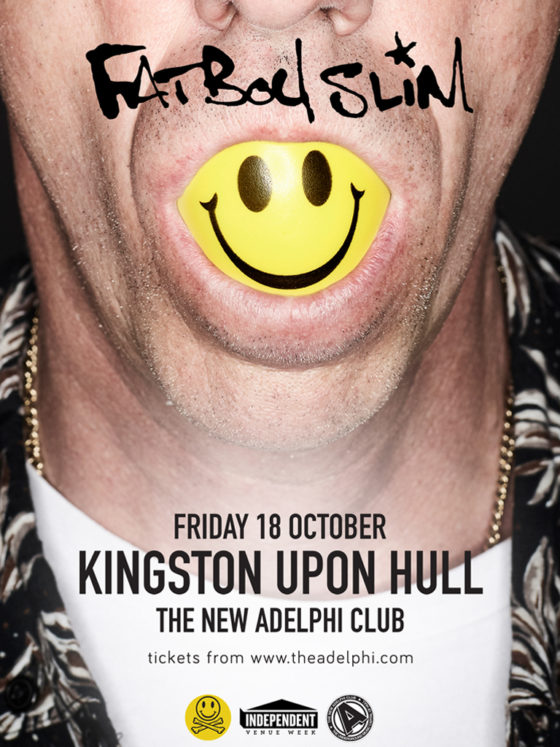 The must-attend event of the autumn, FATBOY SLIM takes centre stage on Friday 18th October for one of the most eagerly anticipated intimate gigs the City has ever seen.

We are over the moon to welcome Norman back to The Adelphi Club where he has performed and rehearsed many times in the 1980’s. Needless to say, you’ve come a long way, baby.

Norman first rose to fame in the 1980s as the Housemartins bassist, adopting the Fatboy Slim monicker in 1996 and racking up major mainstream success with his own take on electronic dance music alongside spellbinding live shows.

“Talk about full circle… I remember rehearsing at the Adelphi in my first band 34 years ago at the very start of my career… and now I get to go back all these years later, for a special show…..head held high!

The event at The Adelphi Club coincides with the 35th anniversary of the house becoming a live music venue although a liquor license was first granted in 1923 as The Victory Club & Institute for Veterans of WWI.

These days, Norman’s show involves not just playing his own patented brand of “party acid house”, but also a complex audio-visual production.

With a capacity of only 200, this show is more of a nod and a celebration of grass roots music venues across the nation. These are the places where it all begins and did so for The Housemartins, Pulp, Radiohead, Idles and thousands more.

Since Paul Jackson opened the venue in October 1984, over thirty thousand bands and knocking on a million punters have graced the tiny musical institution.

“I first met Norman in what must have been 1984, when he was delegated to give me my fiver for a Housemartins rehearsal at The Adelphi Club. He immediately struck me both as an extremely nice and smart guy, but also as someone (as I had found with his close friend Paul Heaton) who would excel in whatever he turned his arm to. He deserves great credit for his successful career to date. To achieve mainstream success while sidestepping over commodification and genre categorisation is rare…a thing I love about Norman’s music is the ever-present sense of fun, along with a constant threat of a surprise around the corner. Well done Norman Cook.”

“To say we’re excited about this is a massive understatement. I saw Norman at The People’s March on 23rd March and told him that Paul Jackson was still running the New Adelphi Club. He couldn’t believe that he was still there – he remembers him and the club so fondly. So we talked about the possibility of a live show. He was as up for it as we were. We thought it might take years given how busy he is so it’s amazing it’s happening so soon. The love for Fatboy Slim is as strong as the love for Paul and The New Adelphi Club. What a way for one total legend to honour another. We’ll DEFINTIELY be down the front for this one.”

with support from Endoflevelbaddie
Doors 7.00pm

Tickets will go on sale RIGHT HERE RIGHT NOW
Friday 6th September at 6.30pm
Tickets are £25 (not for resale).

Fatboy Slim eTickets are on sale through The Adelphi Online Box Office – below.
*The Adelphi does not charge a booking fee

The Rules: Tickets are non-transferable – not for re-sale.
Only the registered purchaser can use the ticket. Photo I.D. may be requested on entry. No touted tickets – Entry will be refused.

Members Only returned tickets – 7th October 2019 – 7.00pm
Tickets are £25.00 each. Tickets are strictly limited to one per member.
Add the number of tickets you require (maximum 1) before clicking Buy Now. Checkout. You will then be asked to login in order to complete the purchase.
* If you add more than one ticket your order will be refunded.