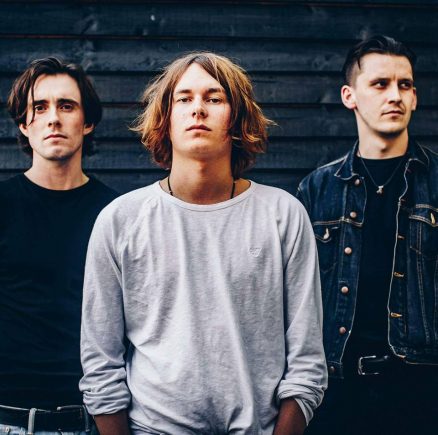 East London three-piece playing lofi psych/garage grooves signed to the label of Gary Powell from The Libertines. Think Frank Black impersonating Ian Dury after stealing Elliott Smith’s notebook; add in a backdrop of Kurt jamming with The Buzzcocks and you’re just starting to get the picture of what the newest pretenders to the post-millennial punk rock throne have in store.

False Heads formed in 2016. Behind the energy of their live shows, the trio of schoolmates quickly thrust themselves into punk-rock limelight, catching the attention of Punk’n’Roll legend Iggy Pop, ex-Ramones manager Danny Fields and music tastemaker Rodney Bingenheimer. Having graduated from playing empty rooms in London to supporting The Libertines, Josh Homme and Band Of Skulls, the buzz around the young band is undeniable.

“They are young and talented and going places… if they came to my town I’d show up for that, if they come to your town, you might wanna show up” – Iggy Pop

“Cementing a reputation for their epic live shows” – The Independent

“Propulsive, energetic songwriting, those pastoral, deeply English melodies are matched against a raw sense of destruction. Check it out now” – Clash Magazine