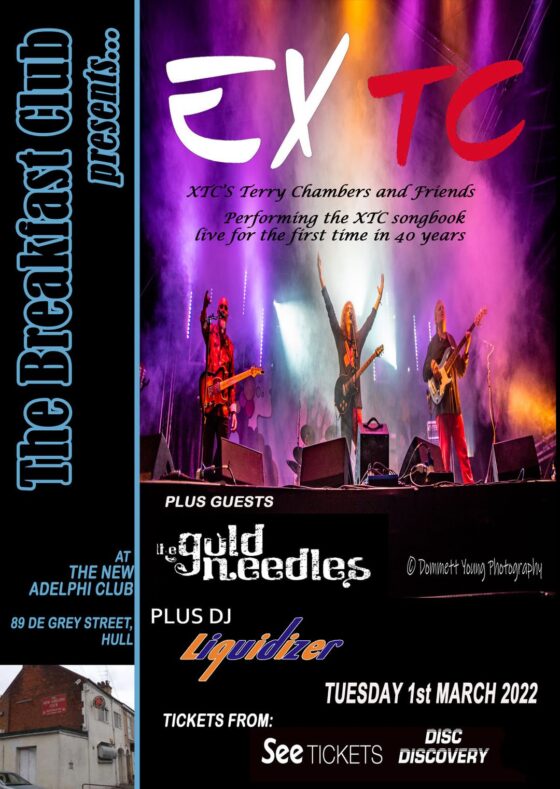 EXTC
XTC’s Terry Chambers and friends performing the XTC songbook for the first time in 40 years.
Adv tickets from:

With hits including Making Plans for Nigel, Senses Working Overtime and Sgt Rock (Is Going to Help Me), XTC was one of the UK’s most exciting and influential bands. But as the band’s success snowballed and the tours grew (including globe-trotting spells with The Police and Talking Heads) XTC main man, Andy Partridge, pulled the plug on touring making XTC a purely studio-based entity.

“For me being in a band is all about playing live,” said Terry. “When we came off the road I thought ”how are we going to promote ourselves?” A little later, rehearsals for XTC’s new album failed to soothe Terry’s concerns: “I felt the songs on our last three albums (Drums and Wires, Black Sea and English Settlement) were great, and we were really playing well. But I didn’t think the new material was heading in the right direction and, of course, we weren’t going to be playing the songs live.”

Enough was enough. Terry upped sticks and emigrated to Australia where he remained with his family for the next three decades. Apart from brief stints in Aussie bands Icehouse and Dragon Terry left his drumkit gathering dust. That all changed in 2016 when Terry visited the UK for a family wedding and reconnected with old XTC bandmate, Colin Moulding. XTC had folded so Terry and Colin decided to collaborate on a new musical venture called TC&I.

“We played six sold-out shows at Swindon’s Art Centre,” said Terry. “It was a fantastic experience.” Sadly, Terry’s return was short lived. Satisfied with performing many of his XTC songs live for the first time, Colin Moulding laid TC&I to rest just before Christmas 2018, leaving Terry with no outlet for his rekindled passion. A lifeline came in the form of Steve Tilling – TC&I’s guitarist and now EXTC frontman. “Steve and I became good friends over the course of TC&I. We both felt we should salvage something from the situation. We decided to form a band that honoured XTC’s legacy while introducing new material of our own. That’s when EXTC was born.”

Terry and EXTC are bringing a full set of classic XTC songs to audiences worldwide. Already, the band has stormed through prestigious shows including headline appearances at the Isle of Wight Festival and London’s legendary 100 Club. And for the ultimate stamp of approval, the band comes with the blessing and support of XTC leader, Andy Partridge.

“The all-guitar line-up recalls XTC in its heyday. Songs that never sat together before suddenly seem part of a unified body of work. It’s all part of the one rich and imaginative canon; like dipping into a selection box of chocolates, except without the ones in purple wrappers you always avoid.” Mark Fisher, Limelight

“A packed, enthusiastic crowd of super fans with two marvellously played sets of their favourite songs was a magic combination. We sang along ’til hoarse and cheered them to the rafters!” George Glen, Music Producer

“A crisp, strong live band, backed by a tight, confident drummer who oozes feel for the songs and drives them along in a way that simply must be experienced. The gig filled me with joy. Once again, EXTC nailed it.” Phil Lively, The Progressive Aspect

Terry Chambers – Drums. The powerhouse behind XTC, Terry Chambers is one of the world’s most respected drummers. As XTC’s original drummer, Terry’s unique rhythms propelled tracks like Making Plans for Nigel, Senses Working Overtime and Generals and Majors. With top producer Hugh Padgham (XTC, Phil Collins, Peter Gabriel), Terry trailblazed the huge drum sounds that became the hallmark of hits like In the Air Tonight, Born in the USA and Hounds of Love. In 2016, Terry reunited with XTC bandmate, Colin Moulding. Under the name TC&I, Terry and Colin released the acclaimed Great Aspirations EP in 2017 and Naked Flames live album in 2019.

His talents have featured on tours and recordings of artists including Joe Jackson, The Vapors, The Move and Ashley Campbell (daughter of Glenn). Steve is also founder and frontman of acclaimed alt country/Americana band, Dead Crow Road.

Matt Hughes – Bass, vocals. Matt has played bass guitar and upright bass professionally for over 20 years, recording and performing with signed bands in Europe and the USA. His credits include tours and sessions with artists including Rick Wakeman, Damian Wilson, Robyn Hitchcock, Roger Beaujolais and Bonnie Tyler.